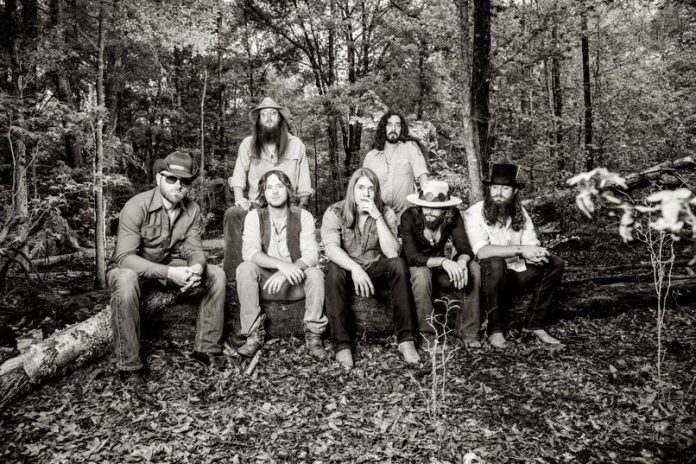 Chatting backstage with John Hopkins, as Whiskey Myers finally make it to Birmingham

They say you shouldn’t be surprised at anything these days, but sometimes, well, you’ve got no choice.

MV is backstage at the Birmingham Institute with Whiskey Myers guitarist John Jeffers, just before the first support for the evening, John David Kent – who’s brother Tony is newly installed as the Percussionist in WM, and who will himself perform with them tonight – goes onstage.

The December night outside is closing in. There’s drizzle in the air and its chilly in the winter air, and although we might feel like we know The Deep South from countless bands from ZZ Top to Skynyrd to the Drive By Truckers and Eric Church, then we are still British at heart and as the charming guitarist offers a hand to shake and we sit down in the dressing room, the opening icebreaker, well it’s got to be about the weather surely?

So John, how are you finding it? Bit of a change from Texas? Jeffers laughs, perhaps because the question is so lame. Or so quintessentially English – or both – but he’s the model of patience when he says: “you know what, man? I love it. It’s better than back home, it’s too hot back home, I really like the cold.”

Mind you, over the last nine years Whiskey Myers have made a habit of not doing what you expect them to. Take their new album “Mud”. It represented a leap forward artistically – in addition to Kent, Jon Knudson on keyboards, horns and violin is now a permanent member of the band – this though, didn’t appear to be part of any great plan on the bands behalf: “No, we had [track on “Mud”] “Lightning, Bugs And Rain” and just thought it would be cool to stick some horns on it, and it grew from there. After all, horns are just cool…..”

“Mud” has done more than satisfy a creative need in Whiskey Myers too. Reaching number four in the country charts back home, while over here it has propelled them to the very edge of what might be termed “the next level”. Many of the shows on this tour have been upgraded to bigger venues, including this one, and the six stringer has some interesting thoughts as to why that might be: “I think our music resonates with people all over the world, not just those in the South, because we talk about real stuff. We are a real band, real guys and I think people just latch on to that, really. We are really grateful that they have.”

It is something of an odd juxtaposition that a band who is so real, so blue collar if you like, embraces the modern world like Whiskey Myers. The night before our interview the bands gig in London was streamed live on Facebook, and MV wonders if that might have taken the mystery away from the shows to follow. Jeffers sees it differently: “No,” he says firmly. “It’s something that we were blown away by. There were 50,000 people watching it. Man, that’s amazing, to be able to get our music out to that many people is an incredible thing. It’s part of the evolution of the band. And anyway, actually being at a show as opposed to watching it on TV? It’s a totally different experience.

As he speaks John David Kent is just beginning his set, while a few yards down the corridor, the rest of the band are chilling in the Green Room. We’d walked through there just a few minutes before and there was a relaxed atmosphere, as if they all know they are at the top of their collective game and cannot wait to get out there and show the sold-out crowd just that. Jeffers is too modest to say that, of course, but is more forthcoming on the fact he loves being onstage: “It’s great, “ he grins. “It’s what we do this for. We always say in this band that the minute it starts feeling like a job then go and get one, man. Go and do the 8-5. Sure, there are things that you have to do that maybe aren’t fun, but actually playing live and touring, we all love it.”

A band that loves playing live so much, would surely, then, be upset to have to pull any show. That, though, is exactly what they had to do in February, when an accident left the Midlands motorway network paralysed. It just so happened that the worst jams in decades coincided with Whiskey Myers’ scheduled first appearance in Birmingham – where they were supposed to support their friends in Cadillac Three. Jeffers winces now at the memory: “Yeah it was awful. I can remember sitting on that bus, we went nine miles in nine hours. It’s a horrible feeling, but we are really looking forward to being back here.”

But from adversity comes determination, and the mishap has left them with a goal. The Institute has three rooms on three floors. The downstairs one where the sold out crowd are already packing in is the second biggest. Tonight’s show was originally slated to be in the top floor tiny venue (but the band have long since outgrown that) and that gig in February took place in the biggest, which is sandwiched in between and John knows where he wants to be: “We look at things by doing them gradually,” he confirms. “So the aim is simple. To get in the room we were supposed to be in with Cadillac guys, up there [he points upstairs] as headliners. Then we’ll know we’ve made it.”   At this point he smiles and you get the feeling there’s more to come…..

He won’t have long to wait for that, but this slow and steady wins the race approach is refreshing in an age where bands have largely forgotten the old school approach to building a fanbase gradually.  Not Whiskey Myers it seems and this was always the plan: “Absolutely.” Affirms the guitarist. “We are independent in the States, we do all this ourselves. We are grateful to the support of [ticket giants] Live Nation both over here and in the states and [record company] Spinefarm have been really great to us too, but largely we haven’t changed much in the ten years we’ve been doing this.”

This approach even extends to the t-shirts on sale in the foyer. The tour shirt was designed by John himself, and he says – like so much else about the band – it just happened naturally. “Yeah I love drawing, so I just took it to the next level, taught myself how to use the technology, the guys picked up on it and next thing you know I am making the tour shirt, it’s just keeping things in house really.”

Even the music happens organically, it seems. “Mud” ends with a cover of Brent Cobb’s “Good Ole Days” (Cobb’s cousin David produced the record, along with everything from Rival Sons to California Breed and MV favourites A Thousand Horses) and its round the campfire approach plus lyrics that suggest: “these are the still the good ole days, no matter what the teachers, the neighbours and the preachers say” seem like a reaction to the world right now. Jeffers however, reckons it was all simpler than that: “I can see why people would think that,” he laughs, “and maybe it was when Brent wrote it, but nah man, our version just happened after we’d had a few drinks and went back into the studio and recorded it.”

If that approach to recording is refreshing, then it rather mirrors what happens onstage about 90 minutes after we talk. Whiskey Myers proved everything John Jeffers said about them – and moreover everything you thought about them yourselves – to be true over the course of two wonderful hours, delivering a performance that confirms they are one of the great rock n roll bands right now.

Just a couple of days after we chat, it was announced that Whiskey Myers were coming back in the Spring, and included in the run is a trip to that bigger room – whether that means they have made it or not is open to question, as there’ll be more  goals no doubt.

And anyway, it’ll give John plenty of chance to enjoy the weather.