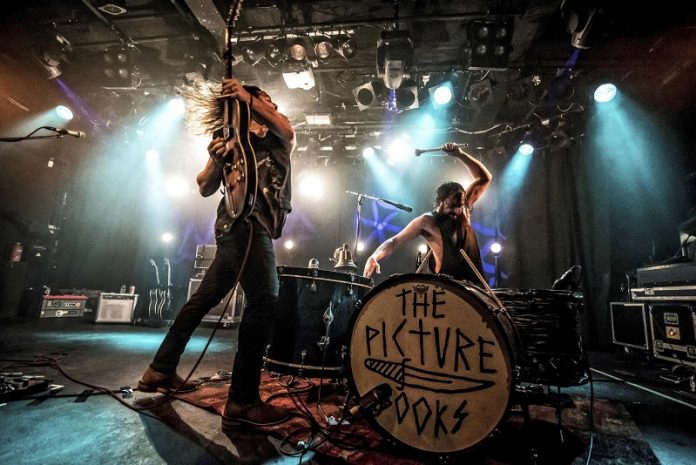 17 months after our last meeting, we catch up with boys again to find out what’s happened since

The Institute in Birmingham is over 100 years old and over the years has been a church, a Civic Hall, and a Jazz Club.

Tonight – and pretty much every other night – there is a gig going on in one of its three rooms. In about 15 minutes the doors will open and let the punters in. According to the piece of paper on the wall behind MV, Canada’s classic rockers Monster Truck will headline at 9.10 but in about 75 minutes German two piece The Picturebooks will be onstage.

MV is sitting with them and they are surprisingly relaxed, Fynn Claus Grabke  and his drumming best friend Philipp Mtschink are the epitome of pleasantness. Fynn moves a couple of guitar cases out of the way so MV can sit down, and there doesn’t appear to be any pre-show nerves.

We are in a room that has Monster Truck’s name on the door, but the atmosphere between two bands is so convivial that such things don’t matter, as we talk Truck’s guitarist Jer Widerman sits quietly on his laptop (he’s transformed into a bare-chested rock n roll wild man in a couple of hours) and across the other side of the room we get down to the business of discussing all things in the world of The Picturebooks.

First and foremost is the album they’ve just stuck out. “Home Is A Heartache” is a quite magnificent affair, bold and original, it is one of the best records so far this year, but we’ll get to that. The most obvious place to start is the Autumn of 2015, because that’s the last time we chatted them, so come on boys fill us in on what’s gone on since….

Quite a lot as it turns out, as Fynn explains: “Well right around the time we talked, I began to suffer some panic attacks,” he admits, quite openly. “It got really bad and it was like my head was telling me to retreat and go back home.”

That wasn’t an option. Firstly, when MV last spoke to them they’d just embarked on a mammoth run of 55 shows and second, well, second is this band doesn’t quit.

The pair have a bond that you just don’t see. Not just in rock n roll, but in life. Fearsomely close, The Picturebooks is a family. This, for once, is not a cliché. The two guys in the band are closer than most brothers, and their manager, producer, confidante, is Fynn’s incredible dad, Claus (a measure of Grabke Snr is this: MV doesn’t walk too well and struggles a little with the stairs down to the dressing room. Seeing this Claus turns and says: “I am sorry, I fractured my back or else I’d have carried you down these”). This bond was exemplified last time we met with the words: “I looked in his eyes and he saw no doubt, and he looked in mine and saw none either”.  This time, Fynn explains that he told his friend of the feelings he’d been battling with: “I sat down discussed it, I opened up, and had all these feelings that I wanted to get out, and as we talked he started playing the drums, I followed with a riff and some words and before we knew it, we’d got [last song on the new album] “Inner Demons”. It was done in one take and was completely improvised”.

That might sound odd – indeed the guys even acknowledge that it is – but it works for the band and gives them a unique sound. They haven’t changed much on the new record, but this was a plan. “Home Is A Heartache” is a sequel to [debut] “Imaginary Horse] affirms Fynn. If you look at a song like “Fire Keeps Burning” then that’s a direct sequel to the song “Your Kisses Burn Like Fire” and that’s how we wanted it to be.”

They even recorded it in the same way. The two and Claus just set up in the workshop they use to customise their motorbikes and whenever inspiration hits, the tapes just roll.  “I think it helps that we can’t sound like anyone else,” says Fynn. “I don’t play guitar with anyone else’s style.” Philipp agrees, “yeah like I said before, I am not a drummer, I don’t even use cymbals, but we’ve never learnt to play, so we do it our way.”

It seems to be working, though. All the hard graft is paying off. “We just set out to play as much as we could, in as many places as we could,” offers Fynn, “and now we go back to places where we had five people when we first played there and they are packed out. That’s why we work so hard, doing all this, just the two of us. All the social media, the promotion, that’s vital. We have to keep control of it at this stage, we give ourselves to it, we have to. This band is us. And we need to keep the word of mouth coming.”

These shows are another stop on that road, and the boys have been looking forward to them. “We got the call to say we would be going all through Europe with Monster Truck, and it was very exciting. The shows have been going really well too and people seem to be latching on to us, which is really cool. Hopefully when we come back later in the year like we are planning to, we can play some bigger venues ourselves.”

Last time we met, MV was struck by the fact the guys were so single minded that they hadn’t listened to music for two years so they weren’t influenced by anything else while making “…Horse”. Fynn smiles we ask them if they still impose that, “nah,” he says, “we listen to all kinds of stuff. Not one style, rock, metal, blues, pop, whatever. Not one thing, that gets boring. “

After these shows are over, they have a really thrilling project on the horizon. Keen bikers and mechanics, they are thrilled that Harley Davidson have been in touch. “It’s incredible” beams the singer. “They’ve given us two bikes and told us to customise them in any way we want to, then we will drive them to special gigs. We’ve got a two-week window after these shows, and we’ll get to work on them, it will be great fun!”

After that, well after that is much the same. Tour, record, and tour again. “There’s a song on the album,” explains Fynn, with a steeliness to his voice, “which sums us up. ‘On These Roads I’ll Die’. We don’t know anything else. We can’t do anything else. This has to work. There is no Plan B.”

A little over an hour after he says these words Fynn Grabke is proving it. Their 40 minutes is one of incredible power as they pull something dark and primal out of the blues. If passion counts for anything then The Picturebooks would be megastars already. Even if the word “unique “ has been misappropriated to the point of idiocy, then find a better description of The Picturebooks. In that 109 years of The Institute, the walls probably haven’t seen anything like it, but then this band knows no other way.

Plan B won’t be required.