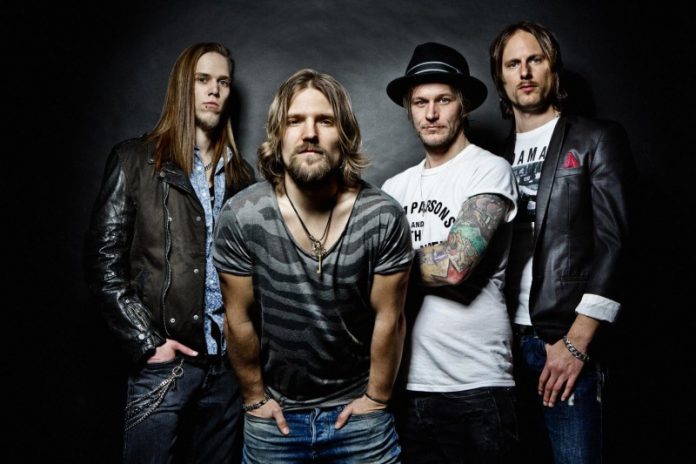 We join the German hard rockers on their first UK tour to discuss, growing the band, imminent third albums and bad chicken

The Angel in Nottingham is, just like any city centre boozer on a Friday night at about half six, full of people. People in suits who have got boring jobs and are stopping off for a couple before going home, but there’s others too. There’s a few in the corner that look like they are booked in for a session, and there’s a few older types who look like this is a place to go before the Theatre.

Tonight, for one night only, it is also home to Frankfurt’s The New Roses. The band are playing their first shows in the UK, and MV is sat here with the four piece to talk about it.

It is doubtful that, as we all sit down in the back room and the boys order their food, there are many people, beyond perhaps a few gig goers who are assembling early, realise that the four – together with their soundman who is born in Wales but has lived in Germany since he was ten – are a rock n roll band at all. In turn, it is unclear whether the band is aware they know that barely a quarter of a mile away the giant Motorpoint Arena looms large.  Whether they are aware, or not, their sound belongs right there.

Unashamedly big songs, but with a big, swaggering country, southern fried heart. Over two fabulous records, the last of which came out on major rock label Napalm, they have proved real talent. It might be a cliché, but in this case, it is absolutely true: The New Roses might just be the best band you haven’t heard of yet.

According to singer Timmy Rough, who has ordered a Veggie Burger while he talks, that’s what this is all about: “yeah, this is the year where we want to expand the band,” he smiles. We don’t just want to play the same places, you know? Like Germany and Switzerland where people know us, on this tour we want to get as far as we can. We are coming here, obviously and that’s great, but we are going to France, Spain, all over.”

The band are due on stage in its upstairs venue in just over a couple of hours, playing 45 minutes before their friends in New Generation Superstars take to the stage. Tonight, is the second of the three gigs in this small run. The previous night, in London, was according to friendly drummer Urban Berz, “excellent, everything we could have hoped for” while tomorrow sees them in nearby Derby.

The fact that the two gigs are less than 20 miles apart affords the boys a rare opportunity on tour. They are staying in the same place for three nights. Basing themselves in Leicester, where NGS are from, is something they aren’t used to. “Life on the road,” explains Timmy from across the table, “is a strange existence. You get up late, you go anywhere to find some breakfast, you drive to the show, If you’re lucky you might get a soundcheck, then you go for some beers maybe and get back to the hotel again. Being able to stop in one place for three days – we drove up after the gig last night – is strange.”

If things go the way they should for TNR, then these visits could get a little more frequent. They are already back in November for Hard Rock Hell, but when MV puts it to Timmy that they could be part of a hard rock revival his answer is interesting.

“You know what?” he counters, “I haven’t really seen anyone who plays the sort of thing we do, and just does it as straight up rock n roll. Maybe The Temperance Movement, but they do it a little more like The Faces or whatever, whereas we are a little heavier, more riff based. So, I think we are offering something different.”

He’s more ready to agree when we suggest that The New Roses are not what you might term an archetypal German band. There is nothing power metal or thrash about them, and he reckons this is down to their influences. “We are just being the band we are, we can’t be anything else,” is his take on it.

He’s right too, there is nothing stylised about the band. Even sitting around the table, you can see that there is a natural air here. Bass player Hardy wears a Rolling Stones hoodie and is the classic rock expert while Timmy admits that he goes through phases, “yeah one minute AC/DC is my favourite band, then I am on a blues trip, country, whatever. By his own admission this accounts for lack of a coherent style. “We’ve been through all that, people telling you that you’ve got to have your hair this way, dress that way. Not for us, we just natural. We reflect what we listen to in the van. It’s better for us like that.”

The band will soon bring out all their influences on album number three. Timmy explains that they are all delighted with how the follow up to “Dead Man’s Voice” has turned out, and admits that whilst it isn’t a departure, it is a natural progression for them. “We are excited about it. There’s a couple of things on there that are really country based, and that’s really cool. You shouldn’t plan these things, but each one should get better. “Dead Man’s Voice” was better than the debut and this one should be the same.”

That debut “Without A Trace” record started with “Devil’s Toys” which is essentially a hedonistic celebration of rock n roll excess “another shot of jack and a one night stand” goes a line in the second verse, so three albums in, has this life met with expectations? You betcha. “Look, it’s the most fun you can have, it’s not like a real life, it’s not like a real job and you spend the rest of your life searching for that high, we are very lucky,” says Tommy with a glint in his eye.

But come on, there must be one thing they don’t like about rock n roll? Asking that question sees many furtive glances around, some grinning before Urban – who formed the band with Timmy – speaks: “Well your food, in the UK, it’s not so good…” he laughs. And it turns out that the boys stopped off in Bang Bang Chicken last night after the show and, without putting too fine a point on it…. “the only thing that went Bang Bang was the toilet in the hotel room” says Rough with a pained look which suggests the memory is still, shall we say, fresh. More pressingly there’s a lack of drink: “Well yeah, we have to buy our own beer over here, so we have to take it easy,” explains Urban. “In Germany, the venues give you beer, not here – and your early curfews, what’s that about?”

Fast forward two hours and the boys are on stage, delivering their songs with the swagger and skill of a band that is in top form. There’s a smattering of the audience singing along too. You’d guess that if they can come back here on a more regular basis, there will soon be rooms full of people that know the words.

Historically, just as the second album was “difficult” it was the third album that broke a band. “Slippery When Wet”? “Born To Run” they are records that went huge. The New Roses know enough about rock history to know this too. They have the sound, the easy charm and the choruses to follow in those types of footsteps.

They might even make enough money to stay away from Bang Bang Chicken.