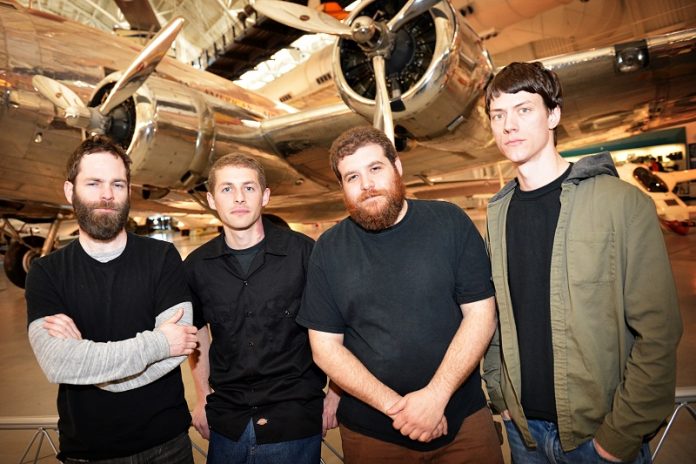 There is something apt about talking to Nate Bergman while the singer/guitarist in Lionize is on the tour bus on his way to Birmingham.

Although the band are natives of Maryland, in many ways it seems that their spiritual home is in the UK’s second city. It’s rich metal history is known all over the world, not for nothing do Tony Iommi and Ozzy Osbourne have their own stars on the walk of fame down Broad Street after all, and however incongruous it might be to have those metal icons right in the heart of the clubs and pubs that pump out horrendous dance music every night, the past cannot be denied however shaky the future looks.

It’s a rich seam tapped into by millions of bands and Lionize are amongst many, a fact that Nate himself recognises: “Yeah man,” he says down the telephone line and on the M1. “How could we not be excited to play the home of metal tonight?”

He then adds something that is the key to making Lionize genuinely different in a world of cookie cutter, identikit music: “I mean, the great music that comes from Birmingham… Black Sabbath, UB40, Steel Pulse, we love it. It’s always a thrill to play there….”

Those last two names. Consider them for a second. UB40 and Steel Pulse. Not names that appear much on these pages, nor does reggae feature often, but with Lionize it is almost inescapable.

Unmistakably a rock n roll band, they are nonetheless a rock n roll band with liberal use of Hammond Organ, and the odd dub influence kicks in. But names like UB40 and Steel Pulse are integral to not just the sound of Lionize, but their history too.  The band have recorded in Jamaica and have a long-standing friendship that saw the Pulse boys watch them in Birmingham earlier this year – a show MV was at too: “Yeah,” confirms Nate, “that stems back from when we opened for them, they are great guys and David [Hinds – SP vocalist] took us out to Jamaica and we made our “Space Pope and the Glass Machine” album with them in 2008. They are going to be there tonight too and it’s great to catch up with them.”

Mention of “tonight” brings us back squarely into the present. Lionize are back in the UK for the second time this year to play a load of shows with their friends, Clutch.

The bands are almost inextricably linked. Signed to Clutch’s label Weathermaker Records, they are frequent openers for them and the Clutch Drummer, JP Gaster, produced Lionize’s breakthrough record “Jetpack Soundtrack.”

Nate is grateful for the help of the more senior Maryland mob. “It’s always great to be out with them,” he offers. “They have been a huge influence on us and how we do things, and are the coolest guys we could play with.”

There is more than that, though, as Bergman is happy to confirm: “I’ve said this before, but it’s nonetheless true, that the Clutch audience is the best to play for too, they are so open to new things.”

And this show is all about new things.

You see, without shining too much daylight in upon magic, this interview should have taken place last night, when the opening gig of the run took place at London’s iconic Roundhouse venue. It didn’t, because of timing issues, but it does give us the chance to question Nate as to the set they played. One which contained half an hour of totally unreleased material. So new in fact, the songs didn’t even have names.

Reflecting with the benefit of 20 hours’ hindsight Nate reckons it was the right decision: “We take it in turns to choose the setlist,” explains the friendly singer. “Last night was my turn and I just said, ‘fuck it lets do it!’ and it seemed to work alright, don’t you think?”

The words “hell” and “yeah” spring to mind, given the quality of – and the fan reaction to – the material that was played. MV is keen to tell Bergman our thoughts on one of the songs that was shared. Clutch guitarist Tim Sult – as he often does – joined the band onstage to play one of them, a Thin Lizzy-esque thing with all the twin guitars you could wish for. It turns out we aren’t the only ones: “Yeah that one seemed to go down really well. We had some great feedback about that in particular, and I reckon we’ll end up using that it.”

When they do, it will be on a full-length record as opposed to the EP’s that emerged this year. That, explains Nate, was just trying something different: “You can’t keep doing the same thing, you gotta keep changing it up, man!”

For the new one, however, Nate has some big, big plans. “I feel we are at the top of our game, these days.” He reasons. “We all have our little roles within the organisation, like Chris [Brooks – keyboards] is particularly keen on mixing and things like that, and I really feel that we can make the record that defines us a band for the rest of our careers.”

In doing that Nate will be emulating some of the bands he most admires. It might be something of a surprise that he namechecks not Clutch (“the way they have done it by building organically is an inspiration” he admits) but classic rockers The Black Crowes and blues jammers Gov’t Mule. Put it to him that you might not immediately associate Lionize with those bands and he shoots back: “There’s not many bands playing real rock n roll these days. Real, no frills, not fake rock n roll. Bands like that are few and far between, those are the bands we’d aspire to be.” 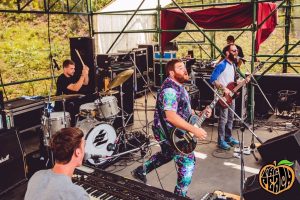 The idea of making rock n roll real again is one which Bergman returns to frequently. It is even in his, let’s call it “distinctive” stage attire (see left). MV and the band had met briefly the day before, just before their soundcheck and the chap in the black t-shirt at 6.30 was a world away from the one walked out an hour later.  It is a puzzle that needs solving, really why a man as considered, reserved and steeped in music as him wears such brightly coloured attire, so come on then Nate, what’s with the gear? He laughs and says: “You know, I decided to do it to make rock n roll a spectacle again. When I was a kid, rock stars looked like rock stars, now you go to a gig and you don’t know who’s on stage and who’s in the audience, that’s just my way of taking it back, giving someone a spectacle and sense of fun again. That seems to be missing from rock n roll these days, so I am doing my bit.”

And in doing so he’s doing something different too, and that seems to be the way of things for Lionize. If the steely determination he displayed while talking to MV, allied to the confidence – and brilliant new material – the band showed the previous night, manifests itself in the way you’d hope it would, then 2017 could be the year of the brightly coloured suit.