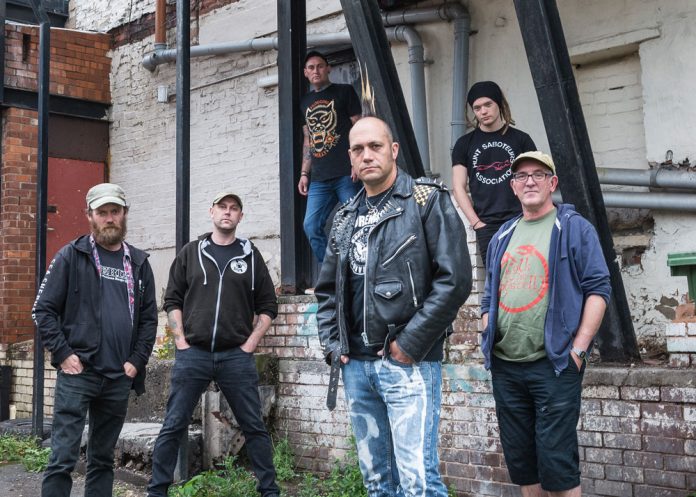 “Well I never expected that……!” you say, not quite sure what the appropriate response is as you are having a chat and it happens.

“It”, to be clear involved someone – I don’t see who, as, you know, I am talking to Ken and stuff, pulling the trousers down of drummer Alex Smith as he climbed onto the roof of the van. Evidently we’re playing by a different set of rules than most artists are here, at the Ely Folk Festival.

We are sat backstage, as the band are about two hours away from a headline slot. And if they are in good spirits, it’s probably because this is what they love – and maybe live? to do.

Just before we get mooned, Ken and Violinist Dan Booth had answered the question: “What do you prefer, then, studio work or gigs?” in unison and as though it was the most obvious response in the world. “Gigs, all day long….”

This one is one of a raft of festival shows they played this summer. It must be a challenge, because let’s be honest, as much as FD are a folk band – and I’d argue this with anyone, what they do is folk in the grand tradition – they stick out like a sore thumb on this bill. Behind us, Martin Harley is playing his brand of Lap Guitar. Harley is fabulous, but fits in with what a good number of the people here are used to. It’s highly likely that most of the punters here today – give or take the FD travelling army, of which more in a bit –  haven’t seen anything like Ferocious Dog before.

If it is a hurdle, it is one that Ken relishes. “Look,” he states firmly – well as firm as Ken ever gets – “It’s a gig and they’re all a challenge, and we like winning people over. Every one we go out to play we do our best, and for that hour and a half, we just want to give people the best show we can.

“Whether its here, or somewhere else, we’ll treat them all the same.”

At this point Bonsall takes his phone out and shows me a video. “Look at this,” he says. “This is from a punk festival in Holland. Only one of these had seen us before. By the end, we had them sitting down on the floor and bouncing up and down when we told them to. It was brilliant.”

So, yeah, we’re back to I never expected that.

At this point, I’d best go back to the start. Last December I’d gone to watch my favourite band play my favourite album all the way through. So, I’ll be totally honest here, I hadn’t really paid much attention to who the support bands were when The Wildhearts played Birmingham. As it happened The Amorettes were unable to play so a band who I wasn’t aware of except by name, Ferocious Dog, played a longer set.

What they did that night, was one of the best two I’d ever seen from a support band (Three Colours Red opening for The Almighty was the only one that comes close in 28 years of gig going).

Those shows, it turns out, were ones the band enjoyed too. “Ginger [Wildhearts frontman] opened for us on one of our shows, playing solo acoustic, and we hit it off. We got on really well, and he invited us on those in return. It was a chance for us – again a bit like this – to get ourselves over to a different audience.”

Mention of the word “audience” is important here. Because even the most cursory of glances at Ferocious Dog reveals something important. The walls between band and “audience” don’t exist here. There is a family feel.

Since that Wildhearts gig I’ve seen them a few more times. One of which was The Levellers Beautiful Day Out in Halifax, and the faces are recognisable. I’d argue that there is not a band with a bond like this with their fans anywhere. “The hellhounds make the gig,” smiles Ken. “We always say, if you’re on your own, come down to the gig. You’re never on your own at one of ours. We’re all in this together. All of us. There’s no us and them.”

With most bands this is hot air. It really isn’t here. At that Halifax gig, I’d watched as Ken went round the crowd after their set shaking hands with anyone in one of his bands t-shirts (and there was a lot of them, believe me!) and as he says now: “to me, that’s the least we can do. Get out there, I am a fan the same as them. I went to watch Skunk Anansie once. Back in the 90s at Rock City, Nottingham, and I’ve never forgotten the feeling of Skin [their singer] making time for me and my mate after. If I can do that too….why not?!” People don’t forget that, and it means a lot to me.”

Ken, is of course, too modest to say it, but a Ferocious Dog have sold the same venue out – no mean feat for an unsigned band who does it all themselves. “We do the merch, we print the posters, we do the social media” affirms Dan. “We are like a cottage industry.”

Of course, none of this would matter for a damn thing if Ferocious Dog weren’t superb. You can be as nice a bloke as you like – and make no mistake even in the brief time we are with them it is clear that it isn’t an act and they are as genuine as it gets – but if your songs don’t cut it, then people don’t come back.

FD, though have fabulous music by the bucketful. A few weeks after I’d done this interview, I was at another festival wearing a Ferocious Dog t-shirt and walking between stages no less than three people came up to me and said: “great band” or “album of the year, that”.

And yet, the mighty album of which they speak, “Fake News And Propaganda” sort of just came together. Ken takes up the story: “I thought we were going to take it easy after [2017’s] the “Red” album. Regroup, recharge, play some gigs. I had nothing!” he recalls. “Then he [points at Dan, laughing] goes online and announces we are making a new record. And its like ‘blimey, cheers mate!’”

Many would call it pressure, but you suspect that neither man here would, whatever, the collection they came up with is just brilliant. “Cry Of The Celt” starts the show later, and there’s a vicious, glorious put down of the right wing press in the title track. Overt politics are part of the band, but as Ken says: “I believe what I believe, I am a passionate Labour man. And I’ll always write songs to reflect that. But that doesn’t mean we should exclude anyone. We’ve got fans who are Tories! Why not? It’s only me expressing my opinion through the medium I have to do it.”

Indeed, there’s one song on the album in particular that seems to exemplify the songwriting on show here. The human aspect to all of this. “Justice For The 96”. Dealing with the Hillsborough atrocity (deliberate choice of word) it could have been an excoriation of Thatcher’s evil government and the lies The S*n told to shame those that died. It isn’t. It is about the human cost of what was allowed to happen. Turns out there was a special reason why this song turned out that way.

“Yeah,” says Bonsall. “I was there. I had to write it that way. I am a Mansfield town fan, but we’d gone to watch Nottingham Forest play the greatest club side of the time. How can it be that people go to a football match and never got to go home?”

That isn’t the only example of that type of song on “……Propaganda” either. “Yellow Feather” is just as important: “It’s written about a Hell Hound that isn’t with us anymore” explains the singer. When he got ill, he used to say ‘I’ve got groovy stuff to do, mate” and that stuck with me. I was trying to end the album to remind people to make the most of every day.”

The band are about to head out on another tour – not that they’ve really been off the road – and they are planning to do the rest of the new songs on the record. “Well, its More Fake News this time,” says Ken, “so look out for some stuff you haven’t heard yet…..”

A couple of hours later the intro tape rolls.  And its final words “See it’s the truth behind my ferocity that lets me drive this message home/It’s that I know right from wrong and I’ll die for those i love. Doesn’t mean I’ll bite first, but as a last resort, I would…..” seem to resonate along with a line on “Fake News”. “Why do they want to rule the world, when the truth is not for sale?”

Because, the truth doesn’t belong to anyone, surely. It’s tangible. And honesty and integrity are not for those in Number 10 – not currently anyway – or in anyone who tells you what to think, but it is right here.

The night before FD play this show, I’d been at Wembley to watch ZZ Top. The contrast couldn’t be more marked. Partly because we were miles away, of course. But as much as I love Billy, Dusty and Frank it felt sterile too. As if they were phoning it in with no heart. When Billy said: “Are we having a good time now?” he didn’t really mean it. Ferocious Dog, up there, on that stage. They meant every word.

I ended the gig review that night with these words. I make no apologies for doing so again. As I was walking out of the tent I overheard two blokes say: “Well that was very good, I didn’t expect it to be. But, still, it wasn’t folk, was it?”

See, expectations, labels. Who cares? And if people are saying I never expected that until the end of time, then nobody, you guess, would be happier than Ferocious Dog themselves.

The band are on tour again from this week. All dates here: http://www.ferociousdog.co.uk/tickets–tours.html