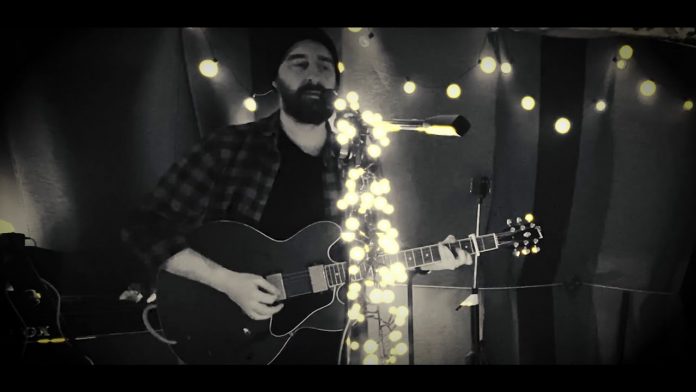 Having built up a live following through a series of uniquely themed gigs involving audience participation alongside a series of single releases, post-rock band Mount Forel release Russia – the first in a staggered release of tracks from their upcoming debut album Small Worlds on the imprint Fallen Swine. The album will be available on a limited run of 12” vinyl and features striking artwork by Japanese artist Hodaka Mitsui.

Not your average band, Mount Forel have grown up and lived in many cities around the world including Denver / Colorado, Dunedin / New Zealand, Osaka and Tokyo / Japan, Derry / Northern Ireland, Manchester and The Wirral. This wide range of cultural influences is much reflected in their musical output with lyrical references to global issues like climate change, populist politics, the suffocating onslaught of technology and the ever-shifting sands of social and societal imbalance.

Russia was recorded alongside other tracks from the album in the Oxfordshire village of Witney at Shaken Oak Studios. It was coproduced by the band and Jake Murray, who then went on to mix the release at London’s Strongroom Studios – the birthplace of many a classic record. Somewhat part of their signature sound, Russia is ethereal in feel with tasteful blues influenced guitar hooks but also highly dynamic throughout, erupting into a full band “rock-out” at points and incorporating unusual time signatures to great effect. Lyrically questioning life in Russia from a Western perspective, the track touches on cultural differences mirrored across the globe.

Mount Forel are Ross Thompson (Lead Vocals, Guitar), Takaco Iida (Bass, BVs), Pete Garner (Guitar, Keys) and Andrew Wakatsuki Robinson (Drums and toys). Influences stretch far and wide to include post rockers like Mogwai and 90s grunge, through to experimental avantpop Japanese indie bands like Toe plus 70s psychedelia, Radiohead, Calexico, Efterklang and Hendrix never far from the turntable. After meeting under an apple tree in London a few years back, they collectively decided to become a multicultural rock band rather than selling cider . . . and so the story began!

Now building a reputation for interdisciplinary gigs where the audience are either invited to wear blindfolds to enhance the aural experience (at Walthamstow’s Mirth, Maud & Marvel) or paint freely while listening to the band (at Hackney’s GROW), Mount Forel reached the finals of the Isle of Wight Festival’s New Blood competition before Corona Virus put an end to live events.

Now back on track with their debut album release, Mount Forel are hungry as ever to unleash their potent brand of post-rock upon the world. Be sure to check out their website for videos and news of upcoming events, gigs and recordings to come.

Where do all these numbers lead?

I see them in the bend

Heading out and loose

I say It’s LA all the way

Heading out in daylight for the end

And I say it to the ones I love

Cause I face it now

See it in the eyes

And everywhere I get I just live a lie

Even in the end

You’re better than I

To my love I cannot say

All the things have gone this day