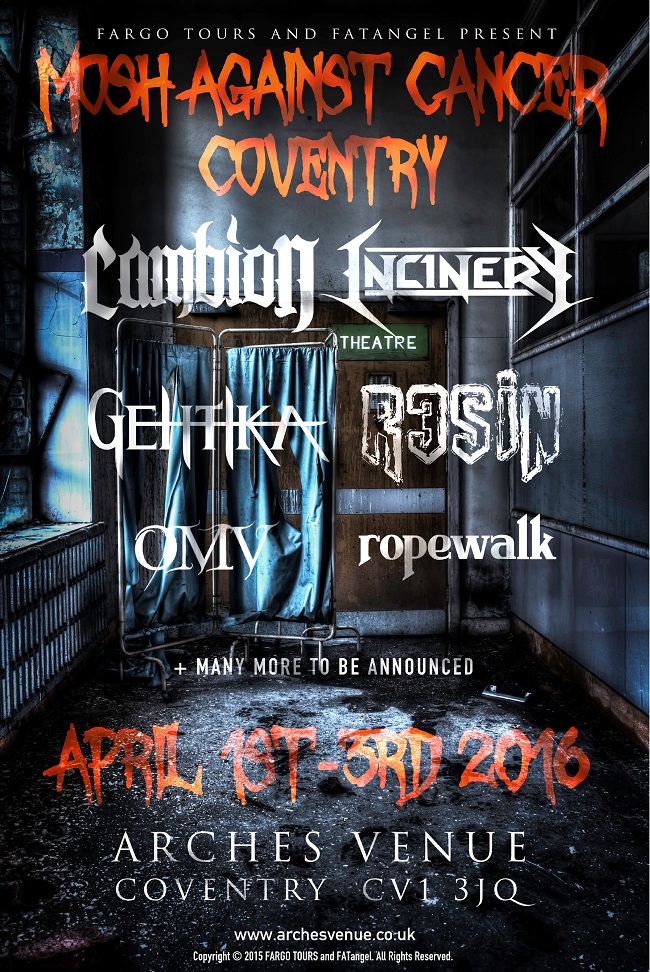 Cambion, Incinery, Gehtika, Resin, Ropewalk & OMV are the first six bands to be announced as playing the Coventry leg of Mosh Again Cancer

FATangel and Fargo Events are proud to announce the first six bands for the inaugural MOSH AGAINST CANCER COVENTRY.

Coming to The Arches Venue Coventry April 1st – 3rd 2016 this three day extravaganza will bring more than twenty eight rock and metal acts from all over the UK to Coventry to perform in aid of Teenage Cancer Trust.

The Arches Venue already has the reputation in the midlands as one of the premium places to play and ask anyone that has ever played a Fargo Event and they will tell you that the nights are second to none. Now together Fargo and FATangel step it up to the next level.

CAMBION have been making a name for themselves in the metal world since forming in 2009.
They have played up and down the UK and a couple of times in Europe. CAMBION have had the pleasure of playing at Bloodstock in 2012, and the Sophie Stage at Bloodstock in 2014, Tech fest UK, Euroblast in Cologne. They also won best breakthrough act at The Southwest music awards
CAMBION are currently writing for their debut album, which is looking to be released in 2015.

INCINERY is a thrash metal quintet exploding out of Nottingham, UK. Influences include the old school thrash masters and the best modern thrashers. Performances which have taken the band to the stages of Bloodstock, Download and Hammerfest to name a few. Their latest release ‘Dead, Bound and Buried’, showcases the bands aggressive take on thrash metal music whilst capturing the ferociousness of their live performances.

An insanely infectious gentlemanly façade feeds the tongue-in-cheek theatrical madness that is GEHTIKA’s live performance. With a hugely successful 2013 under their belt, including their ‘Impossible Question’ EP (recorded & produced by Justin Hill, Sikth), being featured on the Metal Hammer cover mount CD, victories in ‘Big Noise Evolution’s Battle of the Bands’ (sponsored by Blackstar) and Birmingham’s ‘Metal 2 the Masses’ competition, resulting in playing the New Blood Stage at Bloodstock. GEHTIKA returned to Bloodstock Festival on the Sophie Stage in 2014 and performed at Birmingham’s leg of Headbangers Balls, whilst writing the new album.

After a fantastic couple of years RESIN have gone from strength to strength, highlights of which include outstanding reviews for their debut album, a debut music video and no less than three performances at Bloodstock Festival both acoustic and electric. Now in 2015 with new members and a slight rebuild RESIN are back, Currently writing new material with a single and video scheduled for a summer release, RESIN are looking forward to getting back out on the road to showcase the new sound, it’s a bit dirtier and a bit bluesier but it is still 100% RESIN with their trademark mix of Grunge and Metal.

What do you get if you cross the vocal power of a god, the drums of a machine, bass of thunder and the guitars of lightning? The answer is Iron Maiden, but if you can’t afford to see them come and see ROPEWALK instead. ROPEWALK are a four piece metal band from Nottingham, who all draw influences from various types of music and merge them into one distinct sound.

“Their sound sits somewhere between Soulfly and Lamb of God with a bit of Pantera mixed in for good measure.” – MetalMouth

With a history to tell that would surely create a smash hit movie, a song written by the UK’s most notorious prisoner Charlie Bronson OMV are Street metal / Hardcore from Merseyside, formed in January 2012 by front man Richie after his release from prison, OMV write aggressive groove riffs with huge breakdowns all the songs are real life experiences Richie encountered as a criminal , not glamorizing crime but sending a message out to stay away from that kind of life, naming Pantera Lamb of God, Hatebreed and ICE T’s Body Count as influences, this band are guaranteed to deliver a neck breaking performance. Having played with bands including Diamond Head, Lawnmower Deth, Line of Fire and Knotslip at venues including the Liverpool and London 02 academy’s, OMV are ready to take on all comers and prove why they already have a name as the band no other band wants to follow! They are also a band who would rather spend their time in the gym than in a pub, they are bringing a new look and feel to metal and now is their time!

With many more bands yet to be announced along with other features to the show MOSH AGAINST CANCER COVENTRY looks to be one of the  must attend events of next year.