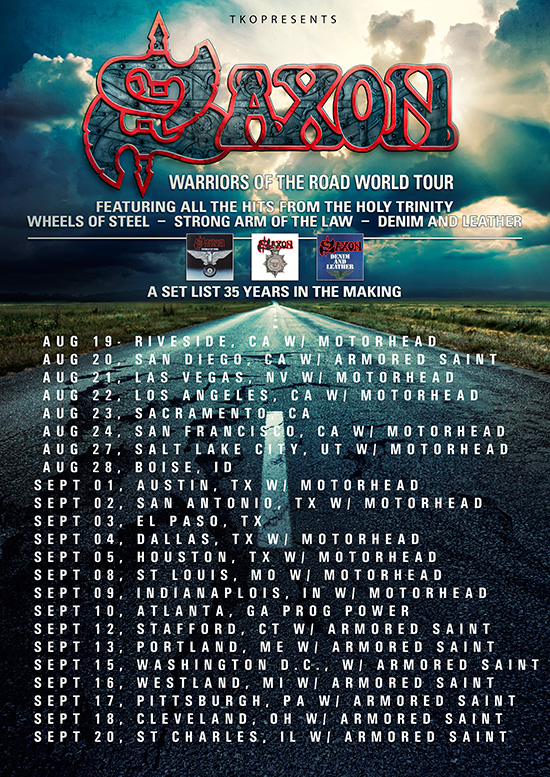 Los Angeles, California’s ARMORED SAINT will join back up with the legendary Saxon for some additional shows in the US this fall to continue touring in support of their highly acclaimed seventh studio album Win Hands Down. The disc is all things ARMORED, a vintage crush of classic power propelled by a cathartic blast of life in the year 2015.

The group will also only be performing one, very special headlining date in the US this year and it’s in Las Vegas at Count’s Vamp’d Rock Bar and Grill on July 11th, so don’t miss out if you are in the area. Either see below or head over to facebook.com/thearmoredsaint for all tour dates and additional information.

Joey Vera states: “We had such a great time playing these dates with Saxon last May, and now they’ve asked us to join them again in September? We’re In! It’s an honor sharing the stage with Saxon and we’re super glad we get to bring this great package to other parts of the country. See you all soon.”

Vocalist John Bush added: “What can we say? The first six shows with Saxon were so good, we added more! We’re playing cities in the midwest that we haven’t played in years: Cleveland, Detroit, D.C. among others. Plus, San Diego! It’s been awhile, thanks for your patience! The guys in Saxon are extremely cool. We look forward to kicking ass throughout America with them. Let’s do this. Win Hands Down!!!”

Watch the group’s latest music video for “Win Hands Down” and order your copy of the album atmetalblade.com/armoredsaint. Also, the brand new official webstore is online now. Visitindiemerch.com/armoredsaint for exclusive t-shirts and merch. More items are coming soon!

ARMORED SAINT is front man John Bush and bassist Joey Vera, guitarist Phil Sandoval and his brother, drummer Gonzo Sandoval and guitarist Jeff Duncan – five masters of metal that combine to forge one of the genre’s most criminally-unsung forces. Win Hands Down debuted at #71 on the Billboard Top 200 current albums chart during its week of release. The album also reached #33 on the German Top 100 albums charts, and #32 on the Canadian Hard Music Charts.