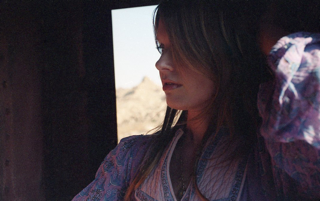 Invisible Hands Music are delighted to announce that, on the back of her well-received album ‘Echoes Of The Dreamtime’ (awarded 4* in MOJO and 8/10 in UNCUT), Miranda Lee Richards will be appearing live in the UK on tour plus supporting the Magic Numbers’ Ren Harvieu and Romeo on several shows, hot on the heels of her recent US dates with the Dandy Warhols. On 16th September 2016, Miranda will release a brand new single, ‘Colors So Fine’– Alternate Version b/w brand new track ‘Lucid I Would Dream’. Her next album is scheduled for February 2017.

Miranda said, “I am so thrilled to be returning to the UK. I have always enjoyed such a warm reception there and I look forward to meeting more fans on the road.”

‘Echoes Of The Dreamtime’ was released on LP and CD [Cat Nos IH63, IHCD63] by Invisible Hands Music. The album was recorded with her husband, producer Rick Parker, best known for his work with BRMC, in their home studio and brings together eight pastoral, atmospheric epics into a work that is her best yet.

The sublime First Light Of Winter is the moment it all comes together, Richards transcending her influences and, no longer constrained, arriving at psychedelia’s higher plane 4* MOJO

Born in San Francisco after the summer of love and before the dawn of disco, she grew up in an artistic and bohemian environment that has informed her adult life and work. After graduating from San Francisco School Of The Arts, she began to pursue a musical career. She met Kirk Hammett from Metallica who taught her to play Mazzy Star songs on guitar. Her early demos reached Anton Newcombe and she joined his band, the Brian Jonestown Massacre. Miranda then signed to Virgin Records in 2001 and released her debut album ‘The Herethereafter’, a mix of folk, psychedelia, country and indie pop, and found fans worldwide. Follow-up album ‘Light Of X’, the title of which comes from a dream about harnessing beams of light to travel in time, followed in 2009 via Nettwerk Records.

A beguiling, honest performer, Miranda Lee Richards is mesmeric in a live setting and these, her first UK dates in seven years, are not to be missed. The ‘Echoes Of The Dreamtime’ album is an addition to an increasingly important body of work.