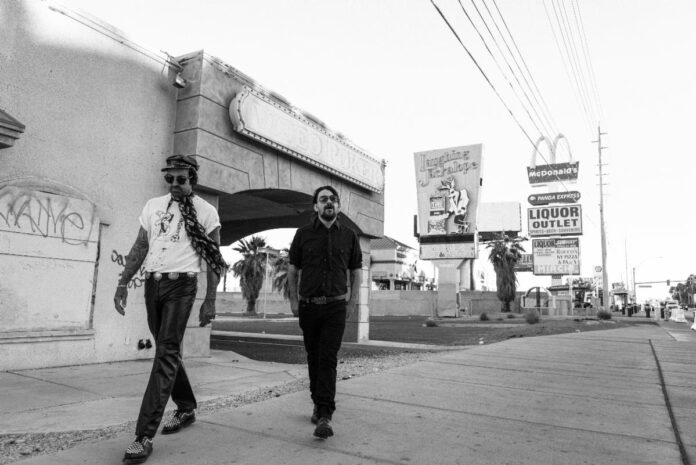 As the anticipation rises for the release of their debut album this month, Sometimes Y, the dynamic new rock collaboration from superstars Yelawolf and Shooter Jennings, has released one final tease with their new single “Jump Out The Window” and its accompanying music video. Yelawolf’s stellar vocals channel Tom Petty on the rapturous tale of heartache. PRESS HERE to download/stream and PRESS HERE to watch the official music video for “Jump Out The Window,” directed by Spidey Smith.

Produced by two-time GRAMMY Award winner Jennings, Sometimes Y’s self-titled debut studio album, out next Friday,March 11th via Slumerican, features the group’s infectious lead single “Make Me A Believer” and the brooding “Rock & Roll Baby.” The songs off Sometimes Y, which have drawn comparisons to everyone from The Killers and Kings of Leon to Bruce Springsteen, are featured on top rock playlists across DSPs, including Spotify’s Pure Rock & Roll, New Noise and All New Rock, Apple Music’s New In Rock, Amazon’s RockArena and YouTube Music’s Maximum Decibels, with their official music videos collectively amassing nearly 4.5million views. Sometimes Y is available to pre-order now; each digital pre-save will include an instant download of “Jump Out The Window” as well as “Make Me A Believer” and “Rock & Roll Baby” – PRESS HERE.

The album will also be available physically on CD and vinyl; CD pre-order and Sometimes Y merch items are available via Yelawolf’s official webstore HERE. “‘Jump out the Window’ may be the song during the making of the album that turned the lights on for us,” shares Yelawolf. “I just walked in the booth and started doing this vocal percussion with hand claps. There was no music, we had no idea what we were gonna write that day, I just had a pocket I wanted to explore. Then Shooter looped it and sat down and found this amazing droning synth line, then came John’s walking guitar part, then Ted had the perfect bass line, and here comes Jamie who fired a machine gun snare part at the top of the record out of nowhere that felt like it just blasted this song into space. And just like that, we felt like a real band that had figured it out. The vocal melody and concept came to me in minutes. I knew after we wrote the music what the song needed to say.” “‘Jump Out The Window’ is a tune that was created from thin air in the studio,” adds Jennings. “I showed up and Wolf and Jamie Douglass had already tracked drums. Wolf had gone in the booth and created the clap loop and Jamie had put down drums for the whole song. I stepped in the studio with my trusty DX7 and started playing just two chords. Next thing you know, we had this banger! It’s one of my favorite songs and videos of the project. We were in the desert of Nevada in 90 mph winds rocking out. I thought those flags were gonna fly out of the ground and impale us all. Rock and roll can be dangerous business.

Don’t try this at home.” On paper, Yelawolf, hailed as “one of hip-hop’s most vital voices” by The Guardian, and Shooter Jennings, one of the Americana world’s most sought-after producers and songwriters, might not seem like the most obvious combination. But after listening to their collaboration as Sometimes Y, you’ll quickly come to understand that their chemistry, built from a decades-long plus friendship, is in fact as intoxicating as it is unexpected. Sometimes Y is a bold and exhilarating rock and roll hybrid, one that fuses past and future sounds to conjure up some alternate universe where David Bowie fronted Thin Lizzy or Axl Rose sang with The Cars. The songs on the forthcoming album are as addictive as they are unpredictable, mixing ’80s bombast and arena rock energy with country earnestness and hip-hop swagger. Jennings’ production work is lush but never crowded, and Yelawolf’s lyrics are utterly arresting, grappling insightfully with purpose and perseverance, struggle and triumph, pain and transcendence. The 10 tracks on the album were recorded at L.A.’s famed Sunset Sound Studios, amidst the COVID-19 pandemic and the heart of a tumultuous summer marked by social and political upheaval. With Yelawolf as the invigorating front man, Jennings, who appears on synthesizer, piano, and acoustic guitar, enlisted his longtime bandmates – Jamie Douglass (drums), Ted RussellKamp (bass, banjo, acoustic guitar), and John Schreffler (guitars, pedal steel) – to complete the project, which was mixed by GRAMMY-winning engineer DavidSpreng (Smashing Pumpkins, Bob Dylan) and mastered by GRAMMY-nominated engineer Pete Lyman (Chris Stapleton, Weezer). Weighty as the record can feel at times, it’s ultimately a work of liberation and release, an ecstatic declaration of creative freedom fueled by adventure, discovery, and a little bit of chaos, which is precisely what Sometimes Y is all about.