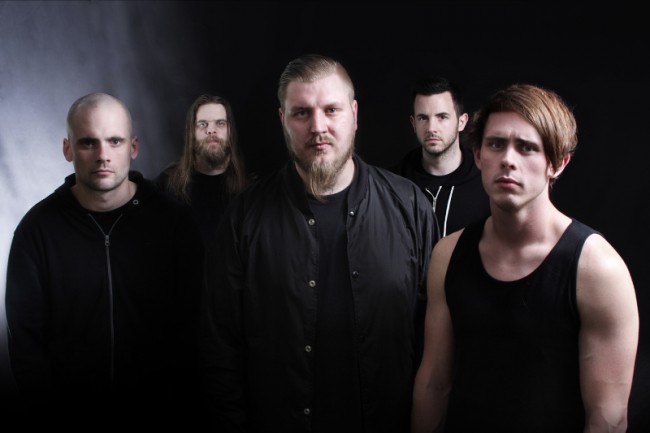 25th September is a day that they say will go down in history. At least for one promising young death metal band from London UK and their hordes of fans both old and new. Today Abhorrent Decimation finally unleash their debut album Miasmic Mutation!

Vocalist Ashley Scott describes this album as “a true labour of love” and had recently spoken of the lyrical content and inspiration behind the songs. “I had just finished reading Dante’s The Divine Comedy again and was really into the notion of personal exile and the journey of life in general. Inspired, I came up with the starting block for the record’s concept, which was to create three passages, akin to The Divine Comedy except I would choose Life, Death and Afterlife. I was particularly adamant we would have nine songs on the final cut so that would allow me three songs per passage to explore the ideas and stories I wanted to tell. Some of the songs are total fantasy but most of them are literal and metaphorical reflections on situations I was experiencing or had experienced around the time of writing, adapted to fit the concept. The mutation itself is a personification of my thoughts, encompassing all these notions of life, death and the afterlife.”

To celebrate its release Ashley has offered some further insight into the stories behind each song on the album.

Glaciate The Servants – Story of Death
This song is the soundtrack to a holy cull. The message is simple, ‘eradicate faith’ and ‘obliterate belief’. Bring forward the death of the billions who are still worshipping the ancient prophecies. Of all the things we could channel our energy, focus and love towards people still revere doctrine? It also explores the widely quoted statement that ‘God is dead’. You cannot kill that which has not lived, however you can terminate an ideology by opposing it.

The Icon of Loss – Story of Afterlife
This is one of my fantasy reflections of what I think the afterlife may be like. NOTHING. Your time has come and that is the end. Death simply gives life a definition. No glory gates, no visions of martyrs. No virgins, no demons. You are put to rest and become one with the earth, history personified.

Eternal Repulsion – Story of Afterlife
This track is a conclusion to ‘Glaciate The Servants’ and in my opinion this is the most ferocious track on the album. Fast paced and vicious in its delivery. Everything about this song is violent; the concept for this one again, is fantasy. It’s written from the perspective of the mutation and of vexed disciples. The mutation has frozen Earth, trapping all the inhabitants. No one escapes and no one goes beyond. The age of gods is dead and we are stuck in its frozen tomb.

Souls Of Sedation – Story of Life
Souls originally came from somewhat of an unorthodox place of inspiration; it was actually the opening sample from a Bobby Womack track that then inspired me to write the lyrics on this one. The sample says… “As a singer grows older, his conception grows a little deeper, because he lives life and he understands what he’s trying to say a little more. If the singer tries to find out what’s happening in life it gives him a better insight on telling the story of the song he’s trying to sing”… I wanted to really try and pin down some process of emotion that I felt passionate about. I wrote about how torn I feel in life between the pursuit of my dreams and the reality that I am a provider for a family with responsibility and other people to consider before myself and while it may seem cliché, I wrote about knowingly suppressing myself with a painted smile, while another self longs to be free. Once I finished it I realised that a lot of people could really connect with this theme, it’s something I think we can all connect to in some way, shape or form and it’s one of my favourite set of lyrics off the record.

…For The Desperately Lost – Story of Life
This song is for the desperately lost. They know who they are.

Miasmic Mutation – Story of Death
Back to the fun stuff! This song is total fantasy and as the title track, it is about the mutation itself. Having now frozen the Earth and all its inhabitants it begins to feast on the sedated souls of those trapped in its icy tomb. Its feast is not supposed to be interpreted as slaughter; instead it is a metaphor for rapture. The mutation is cleansing and it is setting each and every one of them free on a new path of life, in death.

Echoes of the Vortex – Story of Death
This song is about taking secrets to the grave, we all have one, some/many. I explore the idea of the pain it may cause to take things like this to the grave. Whilst the mutation is taking your souls and moving you in to rapture, it acts as the ever-listening ear and offers you a chance to set free your darkest of secrets, the vortex is your confession booth. Enter the vortex, share your secrets and leave them echoing in there forever. However, there is a catch – the more secrets the mutation learns of, the stronger it grows.

Terminal Reality – Story of Life
A few years back my Grandfather was diagnosed with Alzheimer’s; at the time I did not understand the severity of this disease. I then realised it was terminal and that hit hard, after I had processed the situation – in a round about way I was inspired by how frustrated I felt for my family on the outside of his illness. I still can’t comprehend that he has no control of what he is losing from his mind, a long life of memories and happiness with a family that he built from the ground up, all the experiences and countless (seemingly menial) daily actions that you and I consider normal have now become a struggle for him. I was struggling to make it work as lyrics but was passionate to make something on it, so I injected a little fantasy into it and made a comparison to his lack of control against all the indoctrinated minds in the world that have control and the luxury of choice. Cue spiritual genocide, and a sacrifice of all things divine in a bid to save his mind.

Odious – Story of Afterlife
Odious as a concept is a message from the afterlife, it’s a very bleak reflection of life, death and the beyond. In my mind, I always had it penned as the finale as it was set to capture the brutal but very negative spirit of the concept in one song. The message comes from someone who is trapped in the ice by the mutation, soul removed, dead. It looks at the emptiness of death itself and the idea of time continuing regardless of our existence. A lot of ignorant people think the world revolves around them; however it existed long before you arrived and will continue far beyond what you can fathom. I was pitching for something a little theatrical here, perhaps to lead us into the next record as we all have an idea of where our material is going to go.