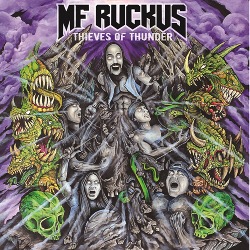 Rock n roll party that doesn’t take life too seriously ….and contains the line of the year

So you are in a band called MF Ruckus (and yeah, the MF part does stand for what you think it does) and you list your band interests on your Facebook bio as the following: “Tequila, fine women, Rock n Roll, Explosions, Colorful Jokes, Cocaine and Chain Smokin'”  it’s probably fair to say you aren’t looking to change the world, are you?

Some bands look down their noses at the idea of a party. Not this bunch of Denver, Colorado reprobates. MF Ruckus it seems, would not just like to be invited to your party, but they’d like to be the house band, and Christ alone knows what state the bathroom would be in by the time they’d finished with it.

Amongst the 15 tracks here, there’s one, “Tastes Like Bleach” which has an opening pair of lines which sum the entire record up most neatly. “Waking up,” sings Aaron Howell, “my wallet seems just a little light/From the looks of things it must have been a helluva night.” And that, is MF Ruckus right there.

Musically there is a little bit of everything that’s ever been cool. There’s a bit of NWOBHM here, there’s some twin guitar that owes a debt to Thin Lizzy, there’s a bit of Rose Tattoo – you almost expect them to break into a chorus of “nice boys don’t play rock n roll” at any point – and enough speeded up scuzzed up Motörhead-isms to keep everyone happy.

Best of all are the rather ironic “We Don’t Party” and what we must view as it’s companion piece, “Gasoline (For My Party Machine)” these are both just good time rock n roll for the 21st century.

Not only that but they manage to chuck in the best song title of 2015 so far with “Jesus Hellraiser Christ” and attempt a countrified hoedown with the tender thought that “All My Heroes Are In Hell.” Which is part Johnny Cash and part Lemmy “(key line here “when the devil rings that bell I’m going home.” )

It even manages to ape The Stones before it’s done. “Cheatin’ Up” borrows extensively from “Dead Flowers” and is perhaps the only ballad in history to have its heart the line “she’s always sucking my friend’s balls, and now she’s pregnant again.” Not that this story ends well, the hero ends with “a.38 Slug on the back of the head” and concludes that: “I shoulda gone drinking instead.”

“Thieves  Of Thunder” is many things. It’s filthy, dirty, delightfully un-PC, unashamed, horns-up fun. It’s also superb. A word of advice though: if MF Ruckus move in next door. Go to the housewarming. Then move.