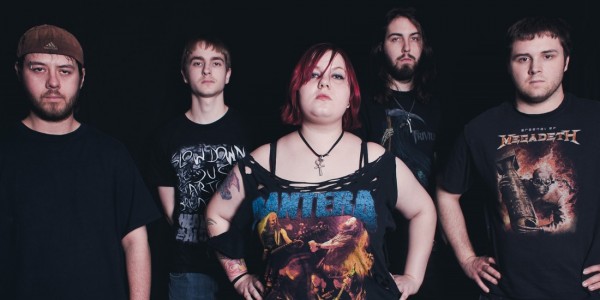 As the Dallas band release brutal new record, frontwoman Jess tells us all about it

Cyhyraeth was founded by Jessica McCain(Vocals) and Alex Jack(Guitar, Vocals) in mid 2011. Shortly after moving to Dallas they met Zach Palmer(Bass) and Kenny Sisk(Drums). They soon took to the local metal scene playing shows everywhere they could, and made an impression on the scene in the process.

In early January 2013 Cyhyraeth went to record their debut EP through Iron Ridge Studios with producer Ryan Ragus. The EP “Disgraced” was released on June 21st 2013 to a huge success. But even before recording their EP, they realized their music could be taken to a much higher level with a second guitarist.

Shortly after the release, Zachary Marsden(Guitar) filled the missing void.

The release of their EP helped them continue building the momentum that inevitably gained the attention of Stephen Murphy and Anthony Lopardo of Westfall Recording Co. in New York. Knowing Westfall would bring them to a new level in their music career Cyhyraeth sought them out to record their first full length album “Servant To The Fire” in late 2014. The process not only helped them achieve what they wanted musically, but it redefined who they were as a band.

“There are things about Cyhyraeth that make our music unique. You have me, (Jess) who has been singing her entire life, then all of a sudden hears a band such as Trivium and Arch Enemy and decides to try growling. Now I like growling  even more than singing and incorporate both into our music.Then you have Alex, he started off playing bass in a town where no musician gets heard, realized he was never really a bassist, and picked up a guitar.

But neither of us would ever get anywhere in New Mexico, So we packed up everything and moved to Dallas. Now we play in packed venues.

As soon as we moved here, we searched on the internet for other musicians and the first bassist we talked to (Zach Palmer) fit perfectly. His style, personality, everything just fit. But especially his playing style, a bassist that plays bass. With style. Imagine that, right?

Kenny didn’t take much longer at all to come into the picture. We tried out a couple of other drummers, but nothing that clicked. Finding a drummer that could play fast on his feet while also being as technical with his hands as he is was something we definitely hadn’t seen before. Zachary Marsden was the hardest one to find, guitarists are hard to find. I originally saw him playing guitar for another local band, and immediately was drawn to his style. Very jazzy, but can shred! So I asked if he would want to join a second band. I am so very glad he can multi-task!
Really it sounds like luck, but the main thing is, we all love what we do. To be a musician is what each of us have wanted our entire lives, and our individual styles and crazy personalities are what make us Cyhyraeth; hard to pronounce, and even harder to define.”