Progressive Death Metal outfit LURID MEMORY might seem like a newcomer to many, however that is not the case. This San Diego based quartet features current and past members of brutal Death Metal titans, GORTUARY. Their first studio opus has already been highly anticipated by both fans and media alike. 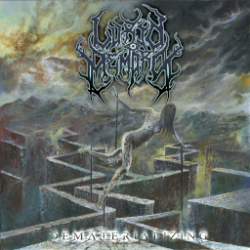 Dematerializing Tracklisting:
1. Whispers in the Dark
2. Fantasy of the Terminal Moment
3. Pangea
4. I Too…
5. Dematerialized