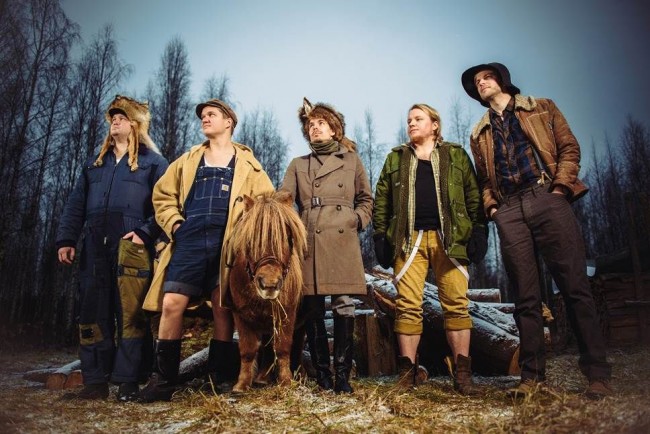 You’ll never look at “The Trooper” the same way again

With almost 15 million YouTube views for their take on AC/DC’s ‘Thunderstruck’ plus a debut album, ‘Farm Machine’, out now via Spinefarm Records, Finnish barn-stormers Steve‘n’Seagulls bring their unique rockin’ style back to the UK for a run of headline shows this autumn…

Tickets go on sale this Friday at 10am (24th July) here:  www.myticket.co.uk / www.kililive.com

“The last UK tour was a real blast, we were thrilled by the audiences every night. To be honest, everything exceeded our expectations, and now we’re coming back to keep spreading the word. We’re getting ready to kick-start the tractors and get this show back on the road!” – Steve ‘n’ Seagulls

What has become a genuine international phenomenon, actually started out on a farm in central Finland; in a barn, to be precise…

There, in said barn, a bunch of like-minded countrymen—with the emphasis on “country”—played a customized version of AC/DC’s ‘Thunderstruck’ wearing outfits pulled together seemingly at random. They filmed the event, posted the results on YouTube, and within a couple of weeks, the clip had accumulated over five million views! It’s now approaching 15 million. Pretty impressive, right?!

Steve’n’Seagulls – comprised of an acoustic guitarist/vocalist; a banjo player; a double-bassist; a big dude wearing overalls and a beaver hat playing mandolin/ keyboards/accordion/whatever-he-gets-his-hands-on, plus a sometimes cajon-straddlin’ percussionist – have delivered a 13-track album featuring rural riffs and villager vocals, filled to the brim with “hillbillified” versions of immortal heavy metal standards.

It’s a body of work best enjoyed with a bathtub of moonshine close at hand, but really, as foot-stompingly enjoyable as S’n’S are on record, you ain’t seen nothin’ ’til you’ve experienced The ‘Gulls live.