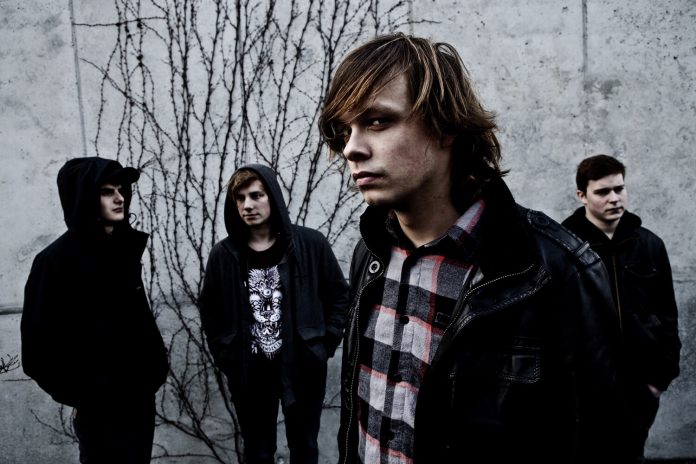 Young Belgian Band tell us why everything is good about touring the UK except the food.

We are grabbing a chat Steak Number Eight before they support Prong on the first night of their UK tour in Birmingham’s Academy, but time, as they say, is marching on. They are due onstage in about an hour. Upstairs H A R K, the other support band, are soundchecking, a luxury that hasn’t yet been afforded the Belgians.

When you meet Cis and Brent from the band for the first time, though, you’d never know they were remotely troubled, let alone any pretence of, you know, pre gig nerves. Maybe that’s because the tour is going so well, “yeah it’s all really cool,” says a smiling guitarist Cis, as we sit down with the tape rolling. “Great bunch of bands, great people, its going really well.”

We’ve even brought the weather. Today has been glorious in the second city, and there is more than a hint of surprise in Brent’s voice when he says: “The sun has been shining, in England….”

The band are used to being in the UK. This is their second jaunt here in two months. The first saw them support UK noiseniks Marmozets. This is a band that you might think were a better fit for their particular brand of music, rather than the angular thrash stylings of Prong and the outright heaviosity of H A R K, but such concerns haven’t fazed the guys. “We’ve got the same booking agent as Prong,” offers Brent, “so the story of how we ended up here was pretty simple.” Guitarist Cis has a different take on it, seeing similarities between the bands. “Prong did what they did, and tried to bend the rules with something new. Obviously, what we do is a little different, but that’s cool, we are doing things in our way, just like them, and as a result, I think it works well to have us on the bill too.”

The key phrase there is “what we do is a little different,” and many people have tried to get a handle on Steak Number Eight since they emerged as teenagers nearly a decade ago. “Post metal sludge” is one rather barmy go at quantifying their sound. Ask the pair to talk about it themselves, and they say only “we go in and we see what works.”

They are a touch more forthcoming about their new record. Finally ready to record the follow up to 2013’s “The Hutch” album, Cis is adamant that we can expect something new: “It’s definitely gone in a more psychedelic direction,” he confirms. Not that this appears to be a conscious decision: “It’s just a natural thing for us,” he says. “We all love Pink Floyd and that’s come out in our sound a lot more this time.  Brent agrees: “Maybe I took too much LSD, this time, I don’t know! But whatever the explanation for it, it’s definitely more Prog than metal, I’d say.”

The record is scheduled for release in the Autumn, which say the two, will mean more shows over here. Does that mean, then, they like touring over here? The pair exchange a look which needs more investigation. Come on guys, spill. “It’s great over here, we love it, says Cis, and his bandmate concurs: “Every time we come back there’s more people here, it’s great to see.”

You still sense there’s a “but” coming, though: “Well it’s different to Europe,” says a by now laughing Cis. Finally we get to the nub of the matter: “It’s the food, man!” Blurts out Brent giggling. “I mean, we are used to it now, we’ve been here so much, but yeah, the food. I mean, it’s like when we were in France recently, there was a huge breakfast waiting for us just meters from the tour bus, here…..” he doesn’t say any more, he doesn’t need to. “But yeah, apart from the food, the UK is great.”

And in fairness whatever they miss about their homeland it appears the music scene isn’t chief amongst the things they yearn for. Ask them what the music scene is like in Belgium and Cis – who until now as been as affable a chap as you could ever wish to meet – suddenly becomes dismissive: “We don’t have a proper scene over there, most Belgian bands, well they are crap to me.”

The equally happy Brent is equally to be out of the country in musical terms. “Belgium is small, the musicians community is small, every one knows each other,” he explains. “I think I know every musician in Belgium!”

It was this desire to escape Belgium, this yearning for something more, that has infused SN8’s work ever since they picked up the musical bug as kids and won the talent contest in their home country that launched them on the path to stardom. Given the sound of the band, the two had surprisingly conventional tastes as kids. Cis reckons he was a “metal guy” as a teenager, while Brent offers up Nirvana as his choice a decade ago.

Things have changed somewhat now, with Cis admitting that he has a thing for Converge: “I love them,” he says, enthusiastically. “Can you imagine playing in that band? It’d be like [makes air guitar gesture of playing a chord furiously] brilliant!”

Brent, who you sense is the more laid back of the two, dressed casually in a t-shirt and jeans, reckons something slower would suit him: “Sleep, that’s the band for me. Really cool, just standing there in a stoner band…..”

Soundcheck calls, and showtime is getting ever closer, so there’s just one more question to remain. The small town they are from Wevelgem (according to Wikipedia- where else?!) is notable for having spawned not just one, but two, winners of the Miss Belgium crown in the last decade. So the food is great, are all the women beautiful too? The pair – who are very evidently comfortable in each other’s company –  think about this answer more carefully than any other. It’s a smiling Cis who speaks first: “I don’t know….it’s like any other place I think, some of them are very beautiful, some not so….” Brent is more evasive: “I have a girlfriend, man! I’m not answering that….” He adds laughing

At this point, they are saved by the proverbial power chord, Welsh band H A R K are ending their sound check upstairs and the thunderous guitar saves the affable duo can’t hear themselves think let alone answer questions.

A little while later, when they stroll, still smiling, onto the stage, it’s hard to imagine that these nice, polite young men can make such a sound, but the amps come on and it’s like switch is flicked in them and all of a sudden it’s game time. The noise they make is beyond huge, and the new song they air does – as they promised – have a touch of psychedelica about it.

Everything about them tells you Steak Number Eight believe entirely in themselves and this band and will do everything they can to make it work. Including suffer English food.