That’s right Maximum Volume have had another opportunity to talk with guitar legend Michael Schenker.  This time Donnie was the fortunate one to pose the questions and here’s how it went…

Donnie called Michael Schenker on the 20th February and after the usual pleasantries were exchanged the conversation began and here’s what the great man had to say.

Maximum Volume:  It’s a pleasure to speak with you.  How are you?

You’ve recently celebrated your 60th Birthday (10th January).  Congratulations.  Did you celebrate it any differently than the previous 59?

You share your birthday with your bandmate Wayne Findlay as well.

You’re on quite a roll as the minute as you get set to release another new album.

That’s right.  It’s called Spirit On A Mission and it’s comes out in a month.

There are some truly outstanding tracks on it such as “Live And Let Live”, “Vigilante Man”, “Saviour Machine” to name but a few.

Thank you.  Doogie (White, vocalist) did a great job.  He really went for it on this album.

He certainly has a great classic rock/metal voice.  The backing of Herman (Rarebell) and Francis (Buchholz) makes for quite a combination?

Yeah, you couldn’t have planned anything like this and it’s funny how it’s come together, step by step, since 2009.  We went through a lots of incarnations with people like Pete Way, Michael Voss and the first Temple of Rock with all of those incredible musicians.  I toured with Robin McAuley in America and with Michael Voss in Japan and then I started in Europe with Doogie and Pete Way.  Unfortunately Pete was not doing so well so we asked Francis and that’s when it took off.

The chemistry was there and we just haven’t stopped since.  Long may it continue.

If you read the majority of the press it appears that artists don’t want to make new albums anymore.  They don’t sell anymore we are told.  You appear to be bucking the trend.

I think what’s happening is there might be such a thing as a 30 or 40 year cycle, I don’t know.  It seems like… I’m revisiting my youth, for some reason.  I feel like I’m back when I was 18 years old.  It happens to everybody, including the fans, you know.

Maybe it’s part of the structure of life.  Even fashion, flared trousers came back at some point.  It might be part of the spiral of life.

Temple of Rock seems to recreate that classic rock sound that you achieve with bands like Scorpions and UFO.

That’s right.  A lot of people have passed away in recent years like Ronnie James Dio, Gary Moore and so on.  Before we know it we will be just a memory and there will be nobody around anymore.  It’s time to celebrate this incredible era which for me started with Led Zeppelin, Deep Purple and Black Sabbath.  It’s basically time to celebrate the sound and push it once again to the foreground.

How quickly and easily did the new album come together?

When I finished Bridge The Gap album I already knew what I wanted to do next.  I had the concept for the next album so on Bridge The Gap I introduce the seven strings a little bit and I knew I wanted more of that on this album. The song “Neptune Rising” was all about Wayne Findlay and he’s developed into a character and is not the fifth wheel on the wagon anymore,  so to speak.

He is a specialist on seven strings and keyboard.  He also loves the ocean and when he comes out of it he looks like a Neptune!!  I’ve asked Dean Guitars to build him a seven string trident guitar, after all,  he’s an ocean god now!!

I asked him to come out with some riffs on the seven string, which he did, then I added my pieces to it and then Doogie gave his vocals and we had a new chemistry of a songwriting team.  It also fits really well with the album as we combine the old with the new.

The concept was to make an album that could be listened to from beginning to end and reads like a book and keeps you entertained until the end.  There are fast and melodic tracks and a couple of some UFO-style mid-tempo tracks to compliment the seven strings of Wayne.  It’s a 1970’s touch with a modern twist.

I would say your vision and concept has been achieved. 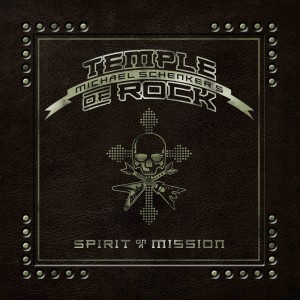 Will there be a heavy touring schedule to promote the album?

We will be there at the end of March and in April and then some European festivals before going off to Japan in June.  Hopefully then we can do Australia and South America before doing Europe and the UK again.

Will the new tracks feature heavily in the new sets?

Yeah.  Although there will be different sets for different places.  We are going to America for the first time in years so obviously the set will reflect that.  The same goes for Japan.  They will be a lot of special sets (laughs).

Going back to the topic of reliving your youth.  Are you still inspired today by the same things you were when you first started out?

It’s a weird situation because as I said before in my brain I have been revisiting my youth.  If I look back into my life then I can clearly see that it’s been one of three stages.  First stage of my life was developing as a guitarist and creating my musical contribution in the 1970’s for the 1980’s.  In the 80’s I was making albums with the Scorpions and that opened the door in America.  My brother (Rudolph) took over and I was then experimenting with music, acoustic instrumentals, electric instrumentals and being focused on personal development.

Now the third stage is all about celebrating what has been achieved and accomplished.  My incredible generation of rock should be celebrated from Sabbath to Purple.  I have come full circle.

It’s great to hear that you still have that inspiration and appreciate the past.

I am tapping into the infinite spring!!  I realised early in life that I wanted to self express so therefore I stopped copying and listening to music when I was 18.  I realised what I needed to do if I wanted to enjoy all of my life and be able to express myself.  Play and discover………just play and discover!!

Only when the individual opens up is there a new colour for the world to look at.  Something that has never been seen before. That’s what I have been doing for 43 years.  When I write and play it’s all based on how I feel and think about it.  It’s a self-expression.

It has served you well and paid off for you.

That’s the interesting thing I’ve learned;  the pay off comes much much later!!  40 years later suddenly all the by-products come to the foreground and it’s unbelievable.

I guess that’s a message you will be passing on when you do the Masters of Metal rock camp with Bill Ward and Glenn Hughes.

The problem with that might be that no-one will listen to the music (laughs)!!   What I am doing only works from an artist point of view.  The consumer consumes and the artist creates. The artist has a choice as to whether he wants to create something or be part of a trend. It’s just a preference I suppose.

Thank you very much for your time Mr. Schenker it’s been a pleasure talking with you.

Thank you so much.  Take care.