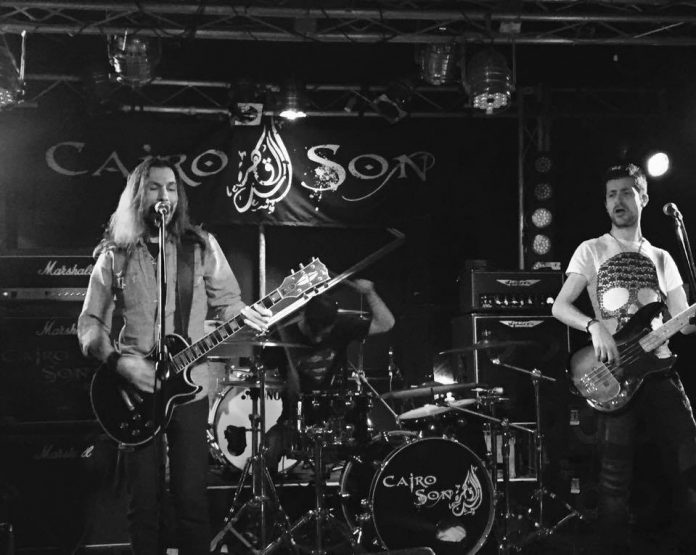 We talk to Magdy and Rico from London’s best kept secret, Cairo Son, about the trials and tribulations of being in a band in a “fast food music” world

The good people of Latvia, as every pub quiz bore knows, are pretty tech savvy. More of that countries population is online than in percentage terms than any other place in the world. And back in early 2000s a couple of their natives developed some software that changed the world. Skype, you see, has become so synonymous with our lives that we barely even think about, so when Magdy Abdel-Rahim suggested that as a venue for our chat about all things Cairo Son, it seemed normal – after all, it’s what friends do, right?

That in itself is a problem. MVM has never met Magdy, but listen to his bands wonderful debut album “Heart Against The Feather,” released a couple of years back, and you feel like you know him really well. When the record was reviewed on these pages last year, we remarked on the unbelievable personal nature of the lyrics – really not since Alice In Chains “Dirt” album, have demons been laid on the line quite so openly.

And yet, when the Skype opens up, Magdy’s smiling face comes back at you from his living room. This juxtaposition is the first thing to clear up, just where does all that come from: “I don’t know, man!” He laughs. “It just comes out naturally and there’s a lot to say. I write songs about things I confront.”

The “….Feather” collection might well have been the only thing the band ever released, were it not for a chance meeting at Harley Davidson dealership in North London. Magdy admits now that the album as essentially a solo record, and that he “did nothing with it.” But a friend proved pretty persuasive.

“There’s a Harley dealership here in London, called Warr’s, he remembers. “Their Managing Director had been a big fan of the record and he asked me to play an event at the shop. I ride a Harley, and I went down, and I saw Kris Rich and Rico Terella there and got chatting.”

Rico and Kris – the latter of whom has now left the band – are gifted musicians who amongst other things, form the rhythm section in Curran. The trio bonded over their love of motorbikes, but crucially, admits Magdy they all said the magic word: “that word was Soundgarden,” he smiles.

Rico – who sits by Magdy on the settee – nods at the memory, but don’t make the mistake of thinking that this is just some grunge band rehashing the mid-90s in a plaid shirt, there’s way more going on here. During the course of our conversation the subject of Down comes up. Magdy excitedly shows off his tattoo of the band, and when MV’s adoration for Thin Lizzy is discussed, he can join in there too – his girlfriend has a Phil Lynott tattoo, it transpires.

And there was one album that kept coming back to MV when we listened to the “Heart Against The Feather” and that was Richie Sambora’s “Stranger In This Town” the stunning early 1990s thing that proved to everyone that the former Jovi guitarist was immensely talented. Abdel-Rahim grins at the comparison, and says “I really loved that record as a kid, and I’ve met Richie (who is thanked on the albums credits) it’s flattering that people get that from the music, but I’ll leave that other to other people to work out.”

A guitar teacher by day and musician in the evenings, it’s not too much of a stretch to suggest that Magdy’s life is music. Which is probably why he is so animated when it comes to the current superficiality surrounding the industry. “Look,” he says. “I respect everyone who gets on stage, don’t get me wrong. But that shit on the X Factor? What’s that!? We are real, music has to be real, doesn’t it? I’ve played in covers bands just to make some money, but we’ve got that integrity.”

Rico – who works in an office to fund his musical endeavour – concurs, indeed he’s a little more outspoken: “I think it’s really unhelpful” he snorts dismissively. “Fast Food, drive thru music, handed to people. That’s never going to be what we are about. I hate it!”

The pair are similarly dismissive of the Internet and its effect on music – an odd dichotomy perhaps considering how we are conducting this interview, but it’s more than that. “I think the Internet has done damage to bands,” says Rico, with Magdy elaborating: “it’s a double-edged thing. On one hand it’s easy for us to reach people all over the world, but it means we’ve got to have Facebook, Twitter, Spotify, all that stuff, but it’s not real interaction, and people want something for nothing.”

The singer cites the recent example of his band being in a Band Of The Month competition, which went to a public vote: “Good luck to the band that won – and I don’t want to sound bitter” admits Abdel-Rahim “but we’ve got how many likes on our Facebook page? We’ve got how many tweeting us? Where are they all when we needed them? It’s too superficial….” He says, trailing off.

Being in a band at this level has its own particular set of problems, not least of which is money, the pair say there are songs written for what will become the second Cairo Son record it’s not that easy to get them recorded: “it’s money, it’s time, its schedules, but we’ll get there” says Terella, determinedly.

That steely determination comes through time and again when listening to the two men talk. A band who absolutely believes in their craft, and one who is now ready – despite the odds – to make up for lost time. There is a Spring tour across the country with Army Of One, and a MVM showcase date in Nottingham to come, as Magdy adds: “it’s difficult, but that doesn’t mean you stop trying? Plus this is my band, the only band I want to be in, I am Cairo Son. I’m the son of an Egyptian, this band is linked to me in that way and that’s very important.”

The new album is no more cheerful than the last, apparently, and the new songs that they’ve been playing live have being going down superbly, so you almost have to believe Magdy when he speaks so passionately about the plans. You suspect that – like the deeply personal lyrics he pens – he means every word.

Now, can we turn Skype off please?!

Cairo Son are on your throughout May.