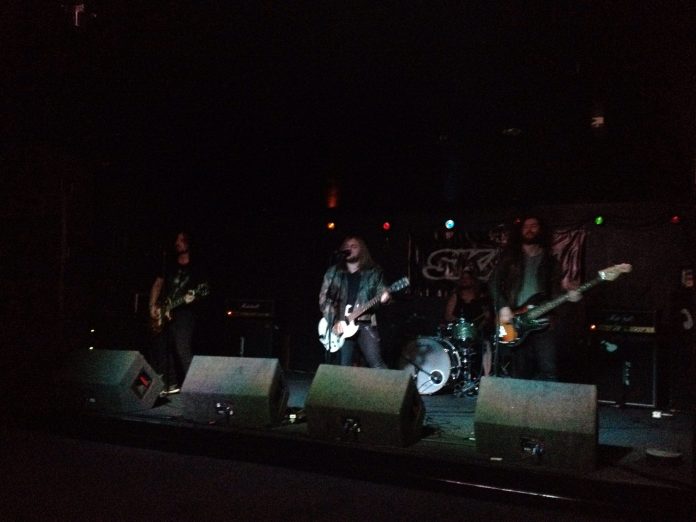 “On the new record,” says Skam singer/guitarist Steve Hill, “we tried to do a lot of different stuff, but sometimes you want to crank out a big, fat E Chord.” Ok then, Steve, since you put it that way…

There’s a plethora of classic sounding hard rock bands around right now it seems. To that list you can add Skam. Now thankfully over the family troubles that saw them cancel their recent shows with Attica Rage, the Leicester based trio are back. And back doing what they claim to be interested in – rocking out for those that are not paying attention. The title track of the aforementioned new record “Peacemaker” swaggers and “Let’s Get Rocked” does exactly what it says on the Marshall stack. Older material like “Massacre” and “Weapon” is a little harder edged, but no less entertaining. These gigs are a warm up for their appearance at Hard Rock Hell this weekend and you imagine they will go down well in North Wales, a band who knows what they want to be – and that, just like their last song – which is a little like Ratt – says, is “No Lies.”

Look, Massive are from Melbourne and at one point they play “If You Want Blood, You Got It.” But largely they manage not to sound like AC/DC. Sure, they are steeped in hard rock of the classic variety, but this is no “Back In Black” rehash.

You might know Massive if you get Classic Rock Magazine. They gave their album away as a cover mounted cd, and with the backing of Earache Records (home to Temperance Movement, Rival Sons, and Blackberry Smoke) all seems set fair in the world of the Aussie quartet.

Ignore the record, though. This sort of music is meant to be seen live, and certainly the band seem happy with life on the road. Watching singer Brad Marr and bass player Aidan McGarrigle swap orchestrated axe wielding at the start of “Big Trend Setter” is to watch a band that is happy to be here.

Appropriately for an outfit who’s debut album is called “Full Throttle” they are relentless. Massive’s best moment for MVM’s money is “Lacey” which not only boasts an urmmm, massive chorus, it catchy groove is like Chuck Berry playing early Motley Crüe.

Marr is an energetic frontman with an engaging manner and even slower numbers like the balladic “Ghost” – which includes a snippet of “God Gave Rock N Roll To You” and ends with Marr playing his guitar with one of Jarrod Medwin drumsticks – are attacked as though lives depend on it. Elsewhere “Dancefloor” might lose a touch of resonance when the crowd is sparse as this, but this isn’t going to stop Marr and his mates.

Tonight as the band winds towards a close with their single “One By One” and the bass heavy “Nothing To Lose” there is a quite simple realisation: rock n roll will never die and there will always be something cool about a band of hairy arsed blokes coming halfway around the world, plugging in and playing loud. Sometimes that’s all you need to say.

Actually the final word should belong to the singer: “You know what’s cool about playing to twenty people? Not a lot” he deadpans. But then he adds this: “But you’ve all come out tonight, so we are going to rock out like it’s Wembley Stadium.” And when you boil it down that’s the point of this type rock n roll.