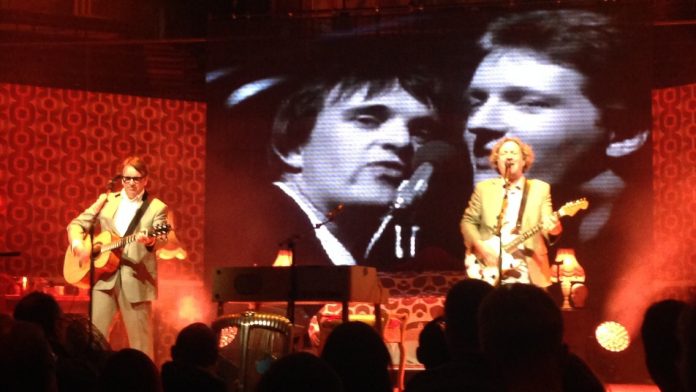 Was it black coffee in bed as the UK’s oddest (double) bedfellows hit Birmingham and Squeeze in some hits (do you see what we did there)?

The wonderful Town Hall stage in Birmingham was transformed into a scene from the Morecambe & Wise show in the 70s, complete with Double Bed, standard lamps and abstract wallpaper the like you would find in your parents house just behind the Fidelity music centre.

This was the setting for the Difford & Tilbrook ‘At Odds Couple’ UK tour. An ‘Unplugged’ tour of sorts, Squeeze have never followed the normal route.

The show started with Chris & Glenn leaping out of bed, making a cuppa then strapping on their guitars to launch into ‘Take Me I’m Yours’. What followed in this first half of the show was a selection of hits such as ‘Black Coffee In Bed’, ‘Pulling Mussels….’, ‘Is That Love’ and ‘Up The Junction,’ mixed in with a brand new track ‘Beautiful Game’, a couple of solo tracks from both Messrs Difford & Tilbrook and a ‘Question & Answer’ segment that was conducted by a man in a gold cape scouring the audience for willing participants.

After a 15min interval the pair returned with the wonderful 1993 track ‘Some Fantastic Place,’ a song that should have charted much higher than its lowly number 73 placing, as well as more hearty banter, audience questions and solo tracks followed including the brilliantly quirky ‘Chat Line Larry’ & ‘Points of View’ as well as the crowd sing along number ‘Ice Cream As Big As Your head’ that Glenn claimed his grandfather sang in Birmingham in the early 1900s – all good fun.

The final few numbers were songs that any songwriter would have been proud of, and these are songs that National Treasures Difford & Tilbrook churned out in bucket loads during the 70s and early 80s, the genius Slap and Tickle’ set us off down the homestretch, closely followed by ‘Annie Get Your gun’, ‘Tempted’, and main set closer ‘Cool For Cats’ that had everyone on their feet for a good old sing along.

The guys returned with the song ‘Cradle To The Grave’ first heard on the Squeeze 2012 tour and next to be used as the theme tune to a new Danny Baker TV show next Autumn. The anthemic ‘Labelled With Love’ followed, a magnificent 400 page type epic condensed into a four minute country/pop song…..the roof was well and truly lifted at this stage. Then it was time for the last song of the night ‘Goodbye Girl” – tune that always hits the spot amongst Squeeze fans.

Most shows on this tour have been sold out for months…..the folk who missed out will not want to be told just how good these performances were, so as they say on the news before ‘match of the day’…..if you don’t want to see this review, look away now…..oops!!

Too late….you missed a belter!!!