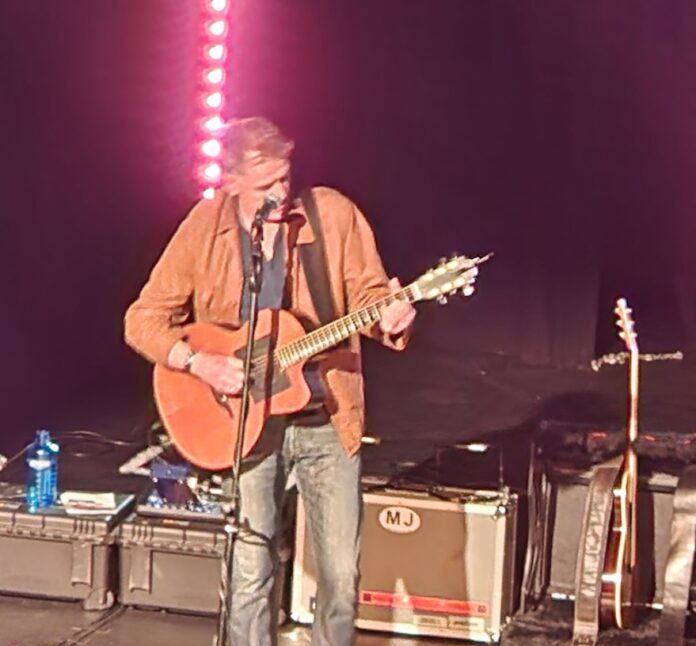 Almost exactly a year ago, I was at a matinee show that Martyn Joseph played just up the road. He was playing a little folk club and so many people wanted to see him, he decided to play twice that day.

I reviewed the gig when I got home and wrote: “There were times that this show veered on genius. Brilliant words, brilliant music and moreover, it all seems to come from the belief that has underpinned my life: “Money doesn’t talk”, Grandad used to say. “It shouts really loud.” Hopefully Martyn Joseph would understand.”

All those things apply here again, in fact, let’s not wait for the end and for some big reveal and get it out of the way here and now: There is a very real chance that Martyn Joseph is the finest folk singer in the UK.

For two and a quarter hours tonight he proves it, yet again. As he seems to every time he takes a stage.

For an artist who is proud of a review that said “he makes Leonard Cohen seem like Julie Andrews” there’s a hell of a lot of hope in these songs. “Here Come The Young” underlines it. Its something I’ve often thought of watching the activism of the younger generation – once scum like Nigel Farage are out of the way there is a chance that cynicism, the hate may go with him. That, to me, that belief in the human race seems to underpin the show (and is present in the work of Billy Bragg and Frank Turner and the likes too).

Joseph is around 15 years older than I, but “Born Too Late” resonates. Where he wants to go to Laurel Canyon and sing songs to Joni Mitchell, I want to see Phil Lynott and Rory Gallagher. It is however, true to say that is what great songwriters do, they make you think, they write songs that are universally personal. Make no mistake about it, Martyn Joseph is a great songwriter.

What the very best do, though, is reflect their times, and “I’d Take You Out” – a vicious anthem of support to Ukraine and a withering attack on Putin – does that. That he follows it with a gorgeous version of Max Boyce’s “Rhondda Grey” perhaps explains how rooted in music Joseph is.

“1960” the album  he is touring was written in the lockdown and as a result is more personal and reflective than usual, but it’s a trait that he’d always had. The lovely “Driving Her Back To London” is bound in family, while his gift for storytelling shines through in “Working Mother”.

A concert split into two halves, he plays “Wichita Lineman”, the first single he ever bought in the second half, but perhaps the highlight is the incredible “Felt So Much”. He lost his dad just before Christmas and speaks movingly of him as he plays this song of childhood memory, and his genius (that word again) for finding human interest stories is there on “Albert’s Place” his forthcoming single which has seen him on the BBC recently.

As last year, “Nye” becomes something of a centrepoint, and frankly, any song about a man that gave us the NHS and called Tories “lower than vermin” is always going to hit home with me. That said, the beautiful inclusivity of “There Is A Field” and “This Light Is Ours” perhaps represent the feeling of warmth in the room tonight best of all.

By way of an encore (“I’ll stay on stage, I was coming back anyway!”) Joseph plays “Hang The World” and a fragile “Cardiff Bay”, and his roots, both as a musician and a person appear to have been the thread for the entirety of the show.

As he’d played “…..Ours” he’d thanked the crowd, but he’d added something that appeared ever more important: “thank you”, he’d said, “for being about part of the community that surrounds this guitar”. That sense of doing something that matters drives Martyn Joseph, but it’s his exceptional talent that you simply can’t ignore.