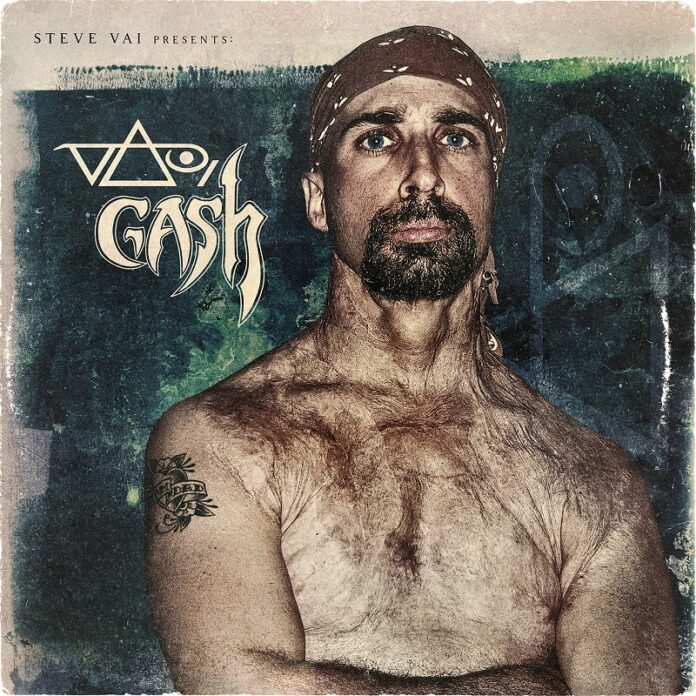 “Around 1990, I was overcome with a desire to rip out what I thought would be a straight-ahead type of rock record that contained the kind of music I wish I had to listen to when I was that teenager ensconced in the biker culture. And then I met Johnny “Gash” Sombrotto.”

That’s what Steve Vai says on the liner notes for “Vai/Gash”.

Or if you prefer. “It feels so good, it feels so right. Come on, baby get in the wind with me tonight!”

That’s what “Gash” exclaims (note, he doesn’t sing it, it sounds way more joyous) on the opening song “In The Wind” – and both in their own way tell the tale of this record and why it is so stunning.

Some history might be instructive. Sombrotto was a friend of Vai’s. Bonding over their love of motorcycles and rock n roll, Vai decided to get him in the studio to see if he could sing those songs he wrote in 1990. “Gash” died in a motorcycle accident in September 1998 (two days after Vai had tragically lost his dad) and the guitarist reckons he’s played this on that day every year since.

There, now we’re all caught up, lets just get on with loving this, shall we?

That opener: “In The Wind” is so full of life, so free, that I’d go so far as to say if you ever liked 80s rock n roll, you’ll love this.  It’s sensational. It’s not that it’s groundbreaking. Indeed, its precisely because it isn’t that it is so good. It’s  – to borrow a title from the era – nothin’ but a good time.

You probably haven’t heard Vai quite like this before. “Busted” is pure Van Halen, “Let’s Jam” celebrates radio in effervescent fashion. This is the most classic of classic rock, while “Woman Fever” wanders off down some blues back road.

That is all the strands of this in a neat package, and the other five are cut from the same groove. Yes, there’s a mid-paced one “She Saved My Life Tonight”, but basically it all sounds like its pure sleaze. “Danger Zone” seems to want to get laid pretty sharpish, “New Sensation” comes in with a groove so huge you can’t fail to love it and if we haven’t mentioned Vai’s soloing yet (it kind of feels redundant to do so, given that he’s a genius…) then perhaps we should. If Gash’s roar makes the album, then the playing makes it fun. You can imagine them, helmets off like Tom Cruise in Top Gun, heading for the nearest horizon with just imagination and music for company.

“Flowers Of Fire” is the one power ballad on the record. All these albums had one, and this is a cracker too. And the fact its only nine songs isn’t lost on me. A lot of the 70s and 80s rock albums seemed to be this length and this just follows the lineage.

We began with some words from Vai. We’ll end with some too: “I wish you would have had a chance to get to know John. I believe you would have loved him just as we all did. For now, he is ‘In the Wind'”.

He is. And this wonderful rock n roll album, full of joy, fun, skill and above all, celebration, is a fitting monument to him.