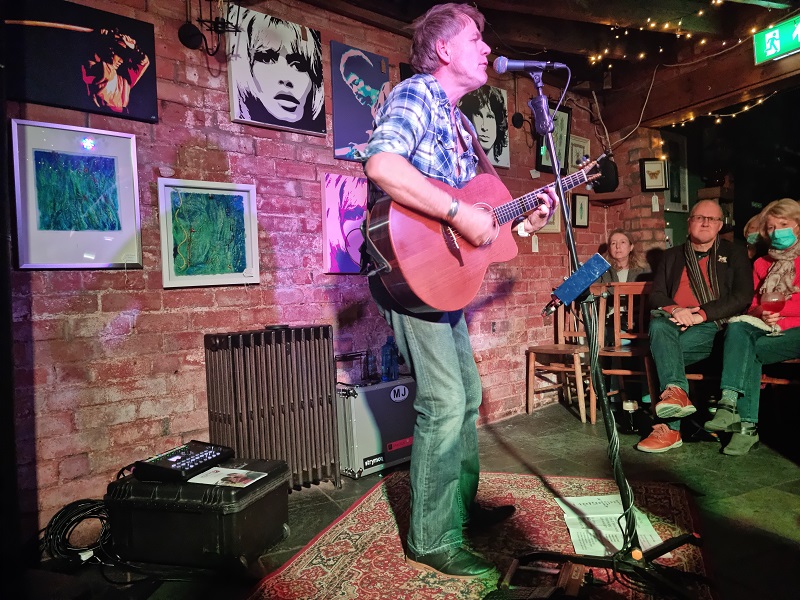 Its not often you go to a gig and get a lesson in songwriting. Enter Martyn Joseph.

He explains how he did it, but make no mistake about this, we couldn’t do it. He can, because the way he uses words and plays his songs makes him a genuine Premier Leaguer. Or at least he should be, but as he points out on stage here he got 1.5m streams last year and earned the grand total of £700.

Talk of 2021 is kind of apt, too, given that he is in Kings Heath for the first of two sets today, to present songs from his 23rd album, released last year. The wonderful “1960”, but he starts with a couple of tunes from his 2020 lockdown EP. “When We Get Through This” unfortunately is still as prescient as back then, but it’s “Here Come The Young” that almost sums the set up. A song of hope, a song of community, a song that offers the light at the end of the tunnel, if you will. That’s what he does for 100 minutes or so. There’s such a warmth, such a camaraderie here.

Joseph is, at 61, some 15 years older than me, but his song “Born To Late” is one that I can relate to. He’d written the song about wishing he’d been in Laurel Canyon (after seeing the superb documentary of the same name) and as I still dream of seeing Thin Lizzy with Phil it strikes a chord. He just does it better than I ever could.

Another of his new song “House” written with his friend Simon Mayo, is a beautiful, gentle thing, and “This Glass” looks on the bright side, and as if to prove all sides of his work he fetches his old guitar out (“I’ve done 2500 shows with her and brought her out of retirement”) he plays the brilliant “Lonely Like America” which he cleverly intersperses with “Dancing In The Dark”.

Family, though seems to be the pillar that all this is built on. “Felt So Much” is a lovely story about his childhood holidays, but there’s no doubt about the highlight of the show – and you feel as if you shouldn’t say this – given that “Shadow Boxing” is about his dad’s battle with Alzheimer’s is heartbreaking and beautiful, especially given the way he speaks about the cruelty of the disease. There can’t be a person that isn’t thinking of a family member at this point, there just can’t.

This is a gig of incredible skill and pacing, though. There’s a brilliant singalong with “I’ve Searched For You”, he celebrates being a grandad by playing “Cardiff Bay”, his song about fatherhood, but in many ways the loose ends are all tied up with “This Light Is Ours” – which is the equivalent of a group hug and the feeling that we are all in it together, against them, unfortunately, but it was ever thus, I guess.

He encores with what he reckons is the artist that started him on this path. Glen Campbell’s “Wichita Lineman” sees him still on the line, but this show has showed that Martyn Joseph is one of the absolute finest singer/songwriters there is.

There were times that this show veered on genius. Brilliant words, brilliant music and moreover, it all seems to come from the belief that has underpinned my life: “Money doesn’t talk”, Grandad used to say. “It shouts really loud.” Hopefully Martyn Joseph would understand.