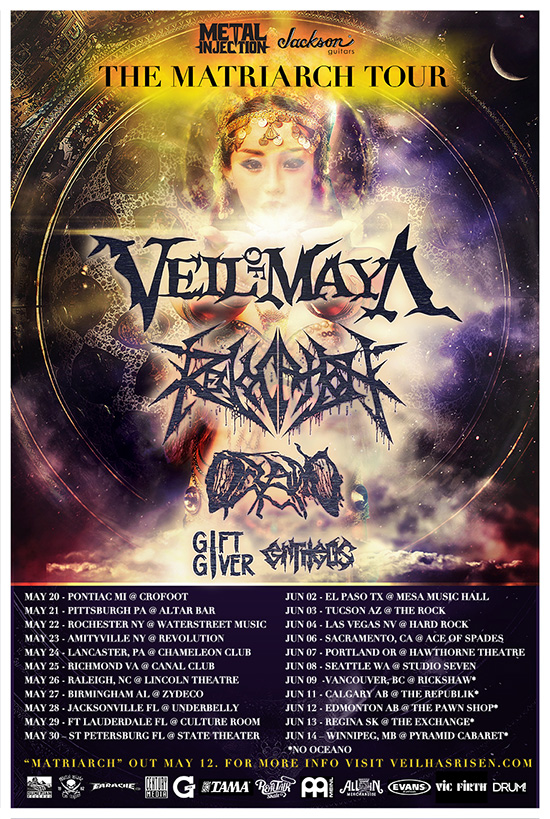 Revocation are back on the road this month supporting Veil of Maya! “The Matriarch Tour” begins on May 20th in Detroit, MI, and winds its way through the east coast, the south, and up into western Canada for a final show on June 14th in Winnipeg. A trailer for the tour can be seen now HERE. Tickets are on sale now through your local ticket outlet.

In celebration of the tour dates, Revocation have prepared a series of lyric videos with fellow guitarist and director/animator Nick Hipa. The first, “Labyrinth of Eyes“, is streaming now on youtube.

During the recording process, the band shot a series of videos documenting their work on “Deathless“. All three episodes, along with the music video for the title track, can be seen now at metalblade.com/revocation.

REVOCATION have spent the last eight years converting fans to their cause with four full length albums, an EP with Scion AV, and a charismatic live show led by guitarist/vocalist Dave Davidson. The Boston-based band also features the staggeringly talented lineup of: Dan Gargiulo on guitar, and Brett Bamberger on bass. REVOCATION has firmly been established as one of the genre’s finest and continue their campaign as part of the Metal Blade Records roster. “Deathless” was recorded with acclaimed producer Zeuss at Planet Z studios in Massachusetts.