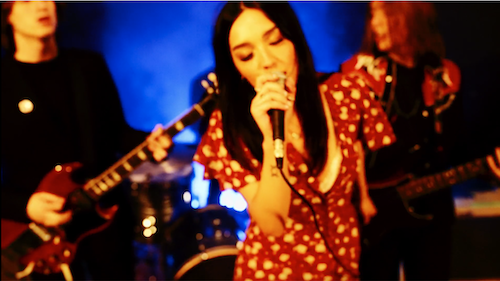 Merseyside tour de force The Mysterines have shared the music video for their track ‘All These Things’, taken from their critically acclaimed debut album ‘Reeling’ out now via Fiction Records. Watch the video here and stream ‘Reeling’ here.

‘All These Things’ is a compelling alt rock ballad that showcases frontwoman Lia Metcalfe’s   prodigious musicianship, with the nostalgic music video being the third the band have worked on with iconic photographer Steve Gullick.

The Mysterines are still riding high on the success of their debut album ‘Reeling’ which was released earlier this year via Fiction Records. Following their first ever headline U.S tour this spring, the band supported Bloc Party on several of their UK tour dates, have just finished three outdoor events supporting Primal Scream, as well as sharing the stage with Muse at their 65,000 capacity stadium show at Firenze Rocks in Florence, Italy. They also recently made their TV debut on Later with Jools Holland, performing ‘Dangerous’ alongside Florence and The Machine and Jamie T. The band will be headlining London’s Kentish Town Forum on Friday 9th December, tickets here.

‘Reeling’ saw stellar reviews across the board on release –  The Line of Best Fit’s 8/10 review said The Mysterines “draw you in with their seething words…mountainous rock tones…and humoured musings on life’s painful inevitabilities over thirteen glorious tracks”, with DIY commenting “their knack for melody is one of their greatest strengths, particularly when combined with frontwoman Lia Metcalfe’s husky tones”. NME declared ‘Reeling’ an “electrifying debut album” in their 4* review, comparing the powerful guitar ballad ‘On The Run’ to “a Celebrity Skin era Hole classic”, meanwhile The Telegraph commented “The Mysterines’ default setting is fast and furious garage punk-rock to which Metcalfe adds a goth grandeur with doomy lyrics and a quality of brazen glee at the rebellious posturing of songs with statement titles.”

The Mysterines are a true force to be reckoned with. Barely out of their teens, they completely sold out both their 2020 and 2021 headline tours, were selected as one of Amazon Music UK’s Ones To Watch 2022, have supported Royal Blood, The Amazons and Sea Girls on tour, as well as headlined the BBC Introducing Stage at Reading and Leeds. Their fans include Steve Lamacq, Jack Saunders, Clara Amfo, Dan P Carter and Huw Stephens, alongside tastemakers NME, Independent, Metro, MOJO, DIY, Dork, Upset, CLASH and Gigwise.