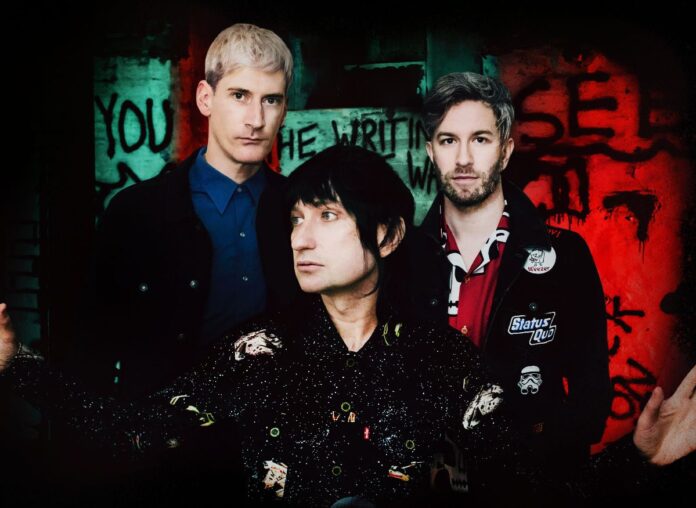 Hyper-melodic, epic rock trio LostAlone have released their new single ‘Punchline Punched Back’, out now via Dharma Records. The band have also confirmed a new album is on the way later this year.

‘Punchline Punched Back’ was recorded during the first COVID-19 lockdown, while vocalist Steven Battelle was shielding in isolation. The band virtually teamed up with producer Greg Wells (Deftones/Twenty One Pilots/The Greatest Showman/In The Heights/Adele), who they had worked with previously, to mix the single.

Battelle explains: “I was dealing with some major toxicity and this song was a way of exorcising myself from it. Feeling like I was recusing myself from life and spending too much time in fantasy – hence the reference to Rekall, the virtual vacation centre in Total Recall (the Arnie version).”

‘Punchline Punched Back’ follows LostAlone‘s comeback single, ‘The Last Drop Of Forever’, which marked the band’s first new music since their 2014 album Shapes of Screams.

Check out ‘The Last Drop Of Forever’ here: https://ffm.to/lastdropofforever

The trio surprised fans with their return in March – eight years since they originally split. They announced their comeback alongside news of supporting My Chemical Romance at three shows in May.

On supporting My Chemical Romance, Battelle says: “We’ve always had such a kinship between our bands, so I was over the moon when they asked us to join them for some of these huge shows. My Chemical Romance fans are some of the most passionate and welcoming audiences I’ve ever played to, so I’m excited to meet them again.”

Battelle comments on the band’s return: “The three of us are buzzing to be back making music again together. I didn’t realise until recently that a part of me had been lying dormant these last few years, but now – without wanting to pre-empt the future – I feel like I’ve that part of me back for good.”

LostAlone will play a sold-out hometown headline show tonight (13th May) in Derby, which precedes their shows with My Chemical Romance.