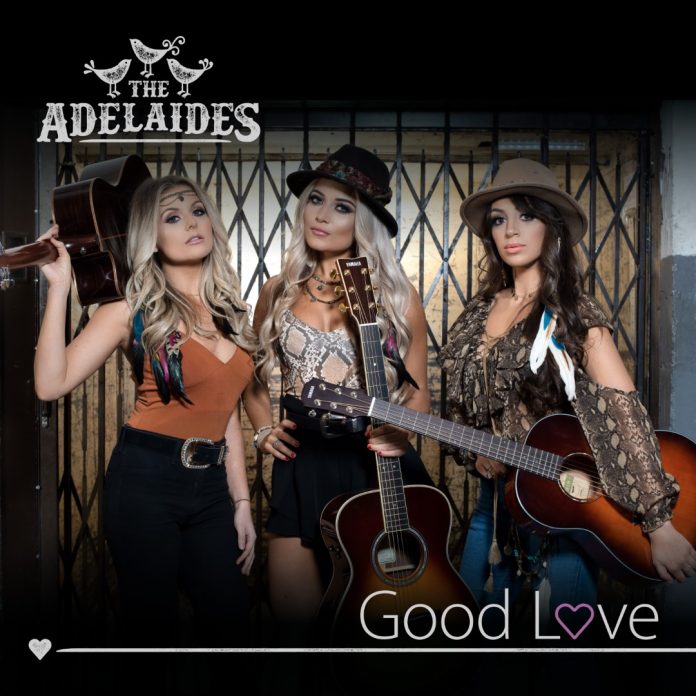 UK Country Pop trio The Adelaides are set to release their single ‘Good Love’ on 31 May 2019 via Demon Music Group. ‘Good Love’ follows hot on the heels of the first track ever made available by the band, ‘Leave’, which was released earlier this month. The fans have waited a while for the first official releases and, like the proverbial buses, they come along in pairs! The release of ‘Good Love’ itself, long anticipated by the Country Music scene, comes just as the trio gear up for their performance at CMA Fest in Nashville on 7 June 2019. The band’s promotion to the biggest showcase in Country Music comes hot on the heels of the esteemed Billboard magazine bemoaning the lack of new female talent in the scene. Worry no more, here come The Adelaides!

The Adelaides are: vocalist / guitarist Paris Georgia, vocalist Alicia Alba and vocalist / guitarist Abi Phillips. A young band, in every sense, The Adelaides nonetheless hark back to the old time Country traditions of talent, truth and integrity. This trio are incredible singer-songwriters who pack a serious collective punch with their own original songs, such as ‘Good Love’ itself; penned with and produced by Grammy-winner Femke Weidema in Nashville.

The band have proved themselves a formidable live act, wowing hardcore country audiences. In October, the band will again support Charles Esten on his UK tour [having done so in January]. As well as consecutive performances at C2C, the band have performed at the Country Music Week show, Hard Rock Country, their own headline shows and many support slots.

The Adelaides have performed at British Summer Time in Hyde Park, Ramblin’ Man Festival, Cornbury, Nashville Meets London, and at the Long Road Festival. This year will see plenty more high profile appearances including The British Country Music Festival and a support for Jess Glynne at Rochester Castle.

Listen to the single here

A truly exciting live act, the girls’ blend of self-penned originals and well-chosen covers, is winning them new fans wherever they go. ‘Good Love’ showcases everything that makes this band so special: written, played and performed by The Adelaides this is the sound of a band well on their way to great things! It’s time to fall in love…