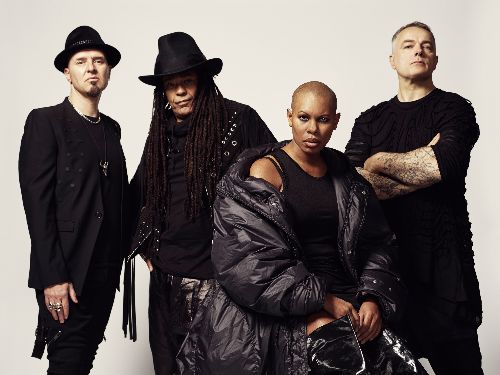 July 7, 2019
Reading time: 3 min.
Facebook
Twitter
Pinterest
WhatsApp
Linkedin
Email
Print
Telegram
Copy URL
By Andy Thorley
Iconic Brit rockers Skunk Anansie return with the brilliant new single ‘What You Do For Love’, which had its world exclusive first play on Jo Whiley’s BBC Radio 2 show last night. Raw and reflective, emotional and political, the track explores the lengths one would go to for love and the questionable things people do for power. Featuring an addictive, cinematic chorus it’s classic Skunk Anansie and set to become a singalong live favourite this summer.

Lead singer Skin comments: “The hardest songs to write are political ones which is why we always try to avoid them. They’re supposed to just instantaneously spill out of you due to pure vexation, or they sound insincere and you fall into tired old clichés. This is one of those moments of rage! Love always seems to be the reason why people do hateful things, which I’ve never been able to understand.”

‘What You Do For Love’ is the first new music from the band since 2016’sAnarchytecture album and comes a week after they started their huge European headline tour, which celebrates 25 prolific years together and the release of the 25LIVE@25 album earlier this year.

The tour arrives into the UK this August where they will play shows across the country including sold out dates in London, Manchester and Bristol, accompanied by Queen Zee and Black Orchard Empire on support.

Since forming in 1994 armed with a hurricane of adrenaline-fired music that excited and shocked a decadent scene, the band have risen from the sweat-drenched backrooms of London to the biggest stages in the world. In the process they have become an important international force in music and culture with numerous Top 40 singles, Top 10 albums and sold-out arena and stadium shows across the globe under their belts.

Now in 2019 they remain as potent and influential as ever, having just received the Hall Of Fame Award at the 2019 Kerrang Awards joining the likes of past winners Rage Against The Machine, Iron Maiden, Green Day, Metallica and Marilyn Manson.

Skin was also featured as one of the cover stars of Classic Rock Magazine’s special She Rocks issue (alongside Kate Bush and Chrissie Hynde) and honoured with the Inspirational Artist Award at the Music Week Awards last year as well as appearing in interviews for the likes of Channel 4 News, Newsnight, The One Show, ITN, and Radio 2 discussing current political and social issues.

As they continue to tear up stages across the globe, inspiring and enthralling fans while releasing new music still relevant in today’s musical landscape, Skunk Anansie are once again at the forefront of British rock music. Long may they reign!

Tickets for the tour can be purchased at the following link – http://gigst.rs/skunka
Previous article
ANTHEM OF HATE
Next article
LINE UP FOR THE EQUILIBRIUM