LOST IN A REVERIE 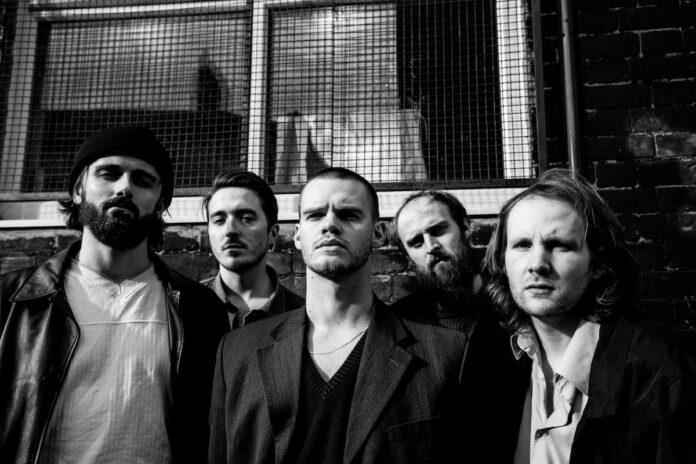 Sheffield post-punk quintet SHEAFS are pleased to reveal the video for album track ‘A Reverie’, showing the band in their element for an atmospheric live performance from their Live At The Leadmill series.

Recently gracing Spotify’s All New Rock and Tidal’s Indie Living playlist, ‘A Reverie’ is the focus track from their debut album, A Happy Medium, which is out now via Modern Sky UK (The Lathums, Red Rum Club, SPINN).

Commenting on the track, which continues the band’s relationship with two-time Grammy award-winning producer Adrian Bushby, SHEAFS say: “A song manifested out of personal account, ‘A Reverie’ narrates the feeling of limbo between being neither asleep nor awake. This song depicts moments of self-inflicted stress in the nighttime. The song gradually increases in intensity, correlating with the time of night.”

Recently supporting punk icons The Buzzcocks on their recent UK dates, the band play Tramlines Festival in Sheffield and Kendall Calling this month, with a run of August 2022 in store appearances just announced (see below for listings).

SHEAFS have slowly but surely turned up the pressure throughout 2022 in the build up the album’s release with a slew of hard hitting singles including ‘En Route Distress’, ‘Millennial’, ‘Vacancy’ and ‘Monotonal Living’—a pummelling series of well-received post-punk mastery, which set the tone for what looks to be a very exciting year for the band.

Quickly racking up national radio support from BBC Radio 1’s Future Artists with Jack Saunders and Future Alternative with Nels Hyton, and championed by Steve Lamacq on BBC 6music, the band have also seen snowballing DSP support at Spotify with placements on New Music Friday UK, All New Rock, and appearing as cover stars on the Shockwave playlist.

After releasing their debut EP Vox Pop in 2020, the band scored a ‘Next Wave’ on BBC Radio 1’s Indie Show with Jack Saunders. This has been followed by consistent support across major national radio stations including BBC Radio 1, BBC 6 Music, Amazing Radio, Radio X and Virgin Radio, and the band have also earned press plaudits from essential titles like DIY, DORK, Gigwise and more over the years.

Previous article
POOR YOU
Next article
YOU, ME, DEEPLY