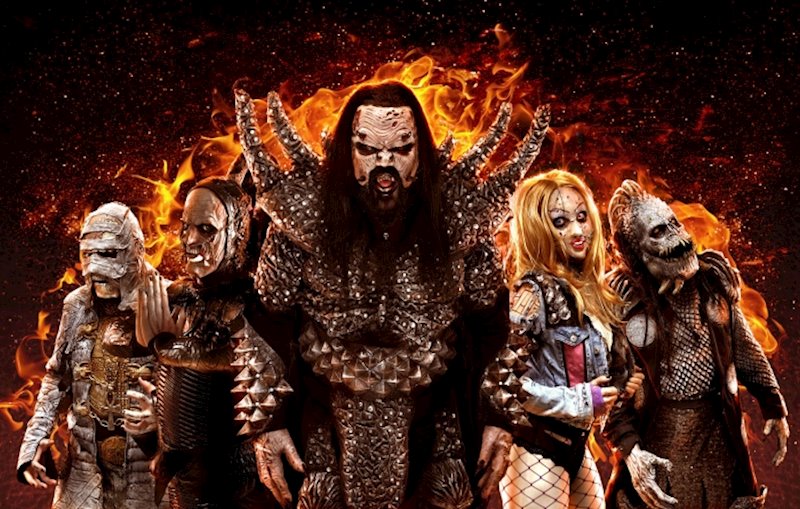 Screaching towards Halloween, Lordi brings with them what is probably the most gruesome Halloween news of 2021: the Finnish ESC winners from 2006 now have their own ghost train!

All aboard The LORDI Ghost Train and experience gruelling terror in the truly unique LORDI style that is featured in the new music video for the bands 3rd single from the upcoming album “Lordiversity“. The track is called “Borderline“, truly an 80’s pop rock hit single.

The rock/heavy metal band LORDI was officially founded in 1992 by singer, songwriter and designer, Mr. Lordi. The band is deeply rooted in Finland and originally comes from Rovaniemi in Northern Lapland. In 2006, the band achieved their international breakthrough with their participation in the Eurovision Song Contest (“Hard Rock Hallelujah”). So far, so good.
But what if this had only been our own little wretched reality so far and in actuality, things are quite different? What if LORDI have actually been active since the early 70s and unleashing one hit after another onto humanity since then?

This is the idea behind “Killection”, the last studio album. It’s a compilation album that imagines that LORDI has existed since the early 70’s. It delivers all the hit singles from the different decades and as they would have sounded if LORDI had made music at that time. The accompanying back catalogue will finally appear in the form of “Lordiversity” – two years after its Best Of and simply from beyond time and space.

Mr. Lordi explains: “In the week of March 2020, after our tour had to be cancelled due to Corona, I thought that I must use the extra time that was available to me. It quickly became clear that the time was perfect to start planning another album, even though “Killection” wasn’t even three months old at the time. But then I realised that there couldn’t be anything more boring than making another regular LORDI album. I really enjoyed writing, recording and producing the different styles for “Killection”, but the idea of simply composing a second part of it also struck me as extremely boring. And since “Killection” is a fictional album based on a previously non-existent, fictional back catalogue of music, I had an idea: The only thing that could top “Killection” would be to record and publish the back catalogue. “

So Said. So Done. “Skeletric Dinosaur”, “Superflytrap”, “The Masterbeast”, “Abusement Park”, “Humanimals”, “Abracadaver” and “Spooky Sextravaganza Spectacular” will all be released on November 26th as physical products (7-CD Box or 7-LP Box in various colours). The complete work is called “Lordiversity”. Monster Songs galore for the dark nights of the year.