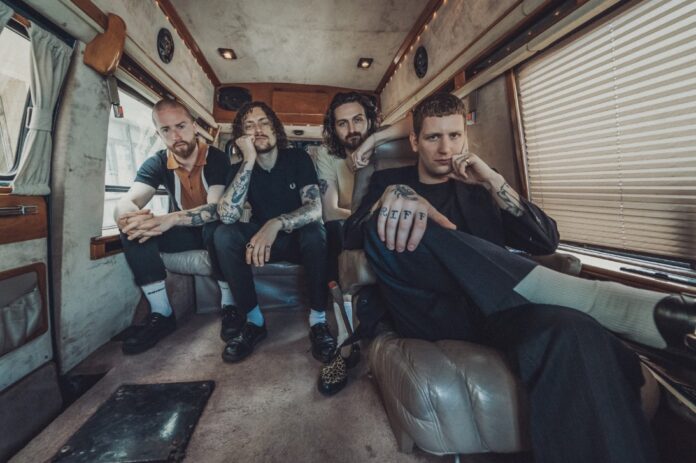 Spinefarm/ UMG is pleased to announce the signing of Hastings 4-piece, Kid Kapichi.

After putting out debut album This Time Next Year independently in 2021, the band have signed a worldwide deal for follow-up Here’s What You Could Have Won. Deserved reward for all their graft. These 11 new songs are an excellent showcase for the band’s bigger, punchier, ‘beat punk’ sound, co-produced with Dom Craik from Nothing But Thieves.

A behemoth of a band on and off stage thanks to the Hastings scene that nurtured them, their best songs explore racism, in-work poverty, mental health, violence, frustration and all-consuming love with honesty and humour. All their songs come studded with barbed wire hooks, bristling with the juddering shock of lived experience, the cathartic thrill of a balled-up fist relaxing into an air punch.

In the wake of this announcement, Kid Kapichi has shared new single/ video “Rob The Supermarket” – watch the video HERE.

“Rob the supermarket is a song about a tear away forced into a tight spot who takes matters into their own hands regardless of the consequences,” Jack explains. “It’s a question about what is morally correct in times like these, with the cost of living going through the roof and food bank usage at an all-time high.

But let’s be honest. For most people, there has always been a cost of living crisis”

The new studio album, Here’s What You Could Have Won, will be released on September 23rd 2022 via Spinefarm; featuring comeback single “New England“- their most explicitly political song yet, with a searing guest verse from Bob Vylan – and Partygate polemic “Party At No. 10“, – which was praised by Liam Gallagher on Twitter, leading to Liam asking the band to support him at London’s Royal Albert Hall – it’s a brutal dissection of the xenophobic Little England mentality.

Kid Kapichi front man, Jack Wilson says, “The title, ‘Here’s What You Could Have Won’ sums up the feeling of missed opportunity. Being dragged right at a junction when you know you should be going left or screaming at the TV whilst someone picks the wrong answer on a game show. It looks inwardly at the UK and the decisions that have been made and how they have affected us all.”

Lead guitarist, Ben Beetham adds, “It’s not a concept album but it does have a running theme. We like to write songs about current affairs and what direction the world seems to be turning. As a result, we write as close to the deadline as possible to keep it relevant.”

HERE’S WHAT YOU COULD HAVE WON TRACK LISTING:

Pre-orders for all formats are now live, HERE.

Tickets are sure to sell out quickly, to access pre-sale tickets head to kidkapichi.com. General sale tickets will be made available at dlwp.com.

Additionally, the band will appear at a number of UK festivals including this years’ Bigfoot festival, 2000 Trees,and Reading & Leeds.

Further touring plans will be revealed in due course.