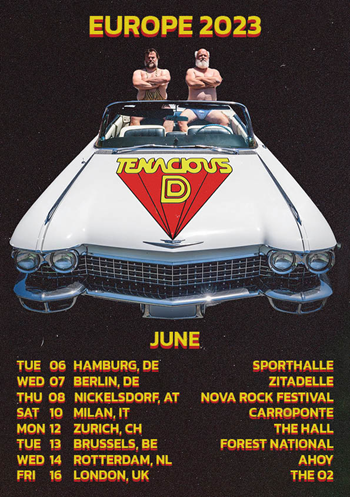 Jack Black and Kyle Gass, otherwise known as rock music icons Tenacious D, return to Europe this Summer for a run of shows that will include a stop at London’s O2 Arena on Friday, June 16th, 2023.

The acclaimed musical duo return to London to showcase their rock greatness to their army of loyal fans.  This will be Tenacious D‘s first show in the UK since 2019, when they played a run of sold out shows that included two nights at Wembley Arena.

Their live experience is an energetic, riff laden rock rollercoaster of fun that will take fans on a journey of their exhilarating catalogue of classic hits on this upcoming tour.  Tickets go on general sale Friday 4th November at 10am via metropolismusic.com.

Tenacious D have had a busy few months with the release of a medley of songs from the rock musical, Tommy by The Who in support of Everytown For Gun Safety, as well as launching their own fibre bars in the US, Fibre D’Lish and doing what they love best, hitting the road for a string of sold out US dates.

About Tenacious D
Tenacious D had a variety series on HBO that aired in 1999, they went on to release their platinum self-titled album in the fall of 2001.  The duo completed their first feature film together – ‘Tenacious D in the Pick of Destiny’ – for New Line Cinema, which was released in November, 2006 to critical acclaim followed by the album ‘Rize of the Fenix’ in 2012, which received a Grammy nomination for Best Comedy Album. In 2013 Black and Gass founded and hosted ‘Festival Supreme’, a music and comedy festival in Los Angeles, CA. In its first four years, ‘Festival Supreme’ boasted acts such as Adam Sandler, Sarah Silverman, Flight of the Conchords, “Weird Al” Yankovic, Patton Oswalt, Eric Andre, Amy Poehler, Workaholics, & many more.  In 2014 they won a Grammy in the category of Best Metal Performance for their cover of Ronnie James Dio’s ‘The Last In Line’.  On November 2, 2018, Tenacious D released ‘Tenacious D in Post-Apocalypto’ – an animated film, with each frame hand-drawn by Black and every character voiced by Black and Gass. Alongside the film, the band also dropped the album ‘Post-Apocalypto’.  In September, 2020 – with great excitement – Tenacious D released the final piece to the Post-Apocalypto universe: ‘The Graphic Novel’.

In 2022 and beyond Tenacious D continue their quest to spread the message of rock n roll across the world and firmly retain their title as one of the greatest rock bands in the world.  Ever.