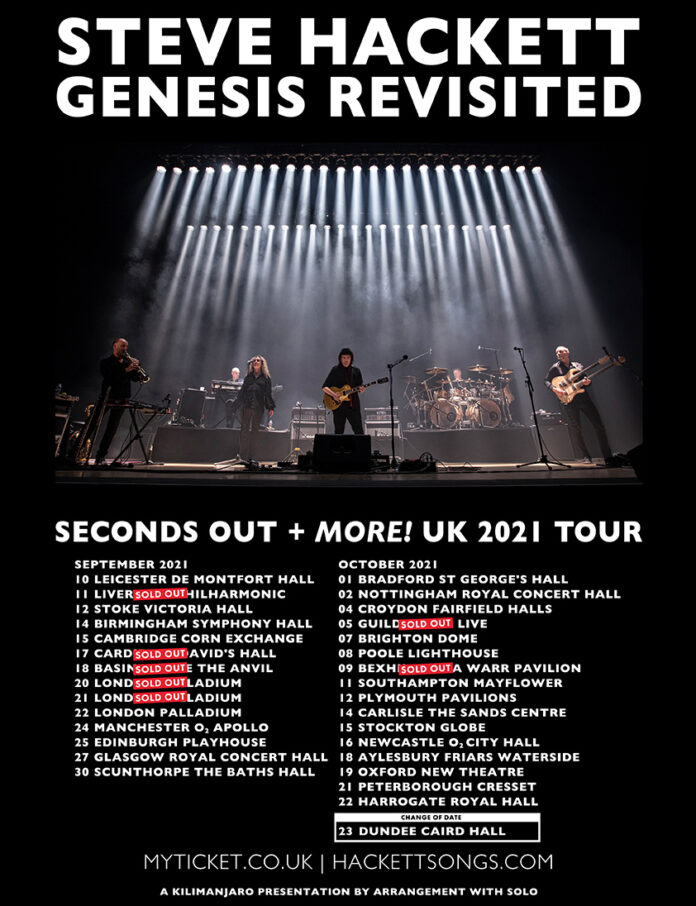 Before we start the gig review proper let’s just make one thing abundantly clear.  Steve Hackett is far more than the guitarist who used to be in the world’s greatest progressive rock band.  For over 6 years he was an integral creative part of Genesis and over the course of six studio albums from 1971’s Nursery Cryme to 1976’s Wind & Wuthering he set a new benchmark in guitar work in the burgeoning progressive rock genre.  However, his departure from the band in 1977 has led to a remarkable solo output of 27 studio albums that expand on his progressive leanings but also incorporating classic and blues music into his impressive repertoire.

Of course, Hackett is rightly proud of his time in Genesis and his regular “Genesis Revisited” shows and albums only highlight that fact, but that is not where we start this evening.  As the lights inside the always impressive Royal Concert Hall dim and the cheers from an expectant, nearly two-year gig-starved crowd, eventually die down it is the opening notes of “Clocks – The Angel of Mons”, a track from his revered 1978 classic Spectral Mornings that starts us on the path to musical magnificence. As a stand alone track it is special but as a set starter it takes on a whole new life and slowly ramps up the anticipation of the crowd for what is to come.

One of two tracks from the brilliant new album Surrender of Silence, released only a couple of weeks prior to this show and on the same day the tour kicked off in Leicester. The track is “Held in the Shadows” and it’s calming acoustic intro and weaving thread is punctuated by a driving heavy rock momentum that once it builds is very difficult to hold back.  A captivating start all round then.

To follow Hackett goes back to a trusted friend in “Every Day”, at rack that never lets him or his audience down.  The highlight of this opening short set of solo material however is the glorious new track “The Devil’s Cathedral”.  This track, as the Seconds Out set to follow will, showcase the talents of vocalist Nad Sylvan.  From it’s opening church organ spiralling melody to the bluesy guitar lines and Nad’s enchanting vocals it is six minutes of slowly building interplay that defies explanation but makes sense when heard as it flies from one musical planet to another without pausing for breath.

Finishing out the first set is an extended excerpt from “Shadow of the Heirophant” from his debut solo album Voyage of the Acolyte.  It is the perfect way to end a set, even one as short as this was.  Hackett has formed a stellar cast behind him, and more about those later, but it is clear that it is Hackett who rightly takes centre stage and the spotlight in this first section.  Not only showcasing his guitar wizardry but also his song-writing talent and composition which stands alongside any of the rock music’s heralded icons.

The mid-gig interval lasts for a lengthy thirty minutes which Steve reminds us is solely due to the venue needing to sell as much alcohol as possible!!  Can’t blame them I suppose and it does give some of the hardened Hackett followers chance to recover and prepare for an entire performance of the Genesis live classic Seconds Out.

As a live album Seconds Out is rightly put on a pedestal as a standard that others aspire to reach.  So much as been written, much better than I could,  about the album and the tracks that appear on it over the past 43 years since it’s release that it is not the best use of time to go into detail about tracks themselves but instead focus on the delivery and performance of the album headed by Steve and his band.

From the opener “Squonk” through to the closer “Los Endos” it is a stunning and often evocative interpretation of some of the music that made the Genesis legend.  Whilst the current, and possibly final,  incarnation of Genesis cover a broader spectrum of the band’s history including many more “modern day hits”, something which I have no beef with and I attended the first show of the Last Domino tour in nearby Birmingham and enjoyed it immensely, this is different.  Obviously Hackett was not part of change of Genesis sound into the 1980’s and beyond and therefore can rightly only focus on his period with the band.  Of which is Seconds Out is as a good a representation as any.

The line-up that Hackett has put together is as good as it could reasonably get.  From Rob Townsend’s beautiful wind instrumentation, keyboard support, Roger King’s ivory tinkling tricks, Jonas Reingold’s sometimes grooving sometimes thunderous bass lines, And Sylvan’s extraordinary ability to often sound like Peter Gabriel without deliberately trying to but then sounds exactly himself without missing a beat.  Apart from Hackett himself that leaves the brilliant drumming and percussion of Craig Blundell.  To be able to play drums on genesis material takes an ability beyond most but to play it to the standard of tonight requires a special talent.  His short drum solo which seemed to be a tribute from Phil Collins to Carl Palmer to Keith Moon to John Bonham and possibly even a touch of Animal from The Muppets thrown in for good measure!!.

Hackett leads this special group of musicians over 90 minutes of some of the finest music recorded.   The band move seamlessly between tracks as if they have been playing the tracks all their lives.  There are moments of subtle introspection on tracks like “Afterglow” and “Cinema Show” and rising crescendos of “Firth of Fifth” or “The Musical Box”.  Not a moment is wasted over the course of gig and Hackett leaves the crowd begging for more as the final standing ovation, I counted three overall, of the evening is ended by the rising of the house lights.

There are many Genesis tribute bands doing the rounds, many of whom are very good indeed in offering a representation of the band and their music but nothing beats the real thing and after seeing Genesis last week and seeing Steve Hackett this evening it is wonderful to know that they are still going and are performing at an exceptionally high level.  In an ideal world a final reuniting of Gabriel, Hackett, Rutherford, Banks and Collins would be utopia but that dream is further away than ever so we should be grateful that we can still see such legends at all.

When the sun sets on 2021 I will not have been to as many gigs as usual, due to the obvious pandemic reasons, but however many I do end up attending this show will be right at the top of the list.