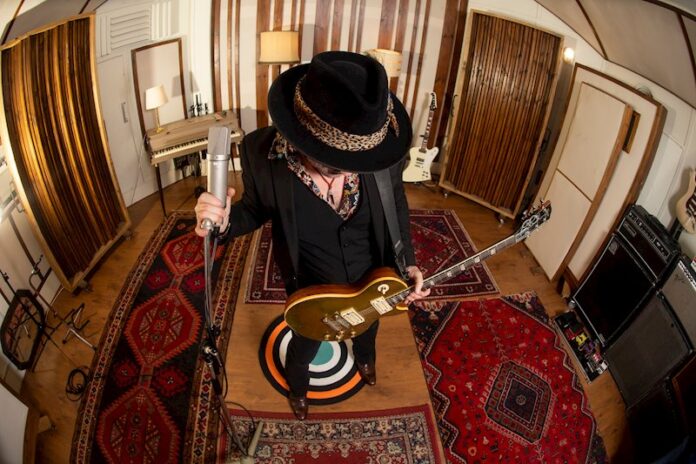 The rebellion continues, con gusto!  Matt Pearce & The Mutiny announce their eagerly awaited second album. Under the tasty moniker of ‘The Soul Food Store’, the 11-track album brims with funky musical goodness: the kind of sound that Matt adores and set out to create when he first set out on his musical mutiny: smokin’ hot songs delivered with talent and passion, in a way that “sounds both vintage and modern at the same time!” (As Darren Redick of Planet Rock Radio described the Matt Pearce & The Mutiny sound). The album will be released through Mutinear Records on 1st April.

The album will be preceded by the single ‘Got A Thing Going On’, a raunchy horn-driven song, released appropriately on Valentine’s Day, 14th February.

Matt Pearce & The Mutiny’s debut release ‘Gotta Get Home’went to #1 in the Amazon Best Selling Blues Albums and Hot New Releases charts; whilst its debut single ‘Set Me Free’ also went to #1 in the Blues charts, has clocked up over 120,000 streams on Spotify, and was Winner of Classic Rock Magazine‘s Tracks of The Week.

Matt explained the original drive behind his musical mutiny solo project and ‘Gotta Get Home’ by saying “I wanted to combine the sounds that I love: rocking blues and funky, soulful grooves. I could call it a ‘Funky Soul-a-delic Blues Rock Jam Thing’, but you can just call it a seriously funky blues band, like the Black Crowes playing Prince songs, or vice versa.”

With this second album, he still ardently pursues that goal, but this time around there’s more too.

“So…” asks Matt, “What is The Soul Food Store? A place, a state of mind, a feeling?  When the song came along, mid-lockdown, it seemed to tie together all the songs I’d been working on, and it became a focus.

“I wanted my album to be what my favourite music is to me: somewhere to go to be happy, laugh, sing, dance, forget all my troubles, or be comforted despite them.

“These 11 songs run the gamut of my musical influences: if ‘Gotta Get Home’ was a statement of intent — that bluesy rock could be funky — then this album is about me being at home, with all the music I love. So, as well as the funk and the rockin’ blues, there’s some soul, and ballads, and psychedelic, and maybe even a little disco vibe creepin’ in… All the sounds that put a smile on my face and that I hope will do the same to you.

“But to get back to The Soul Food Store: the whole point of this album is to combat the negativity that’s so easy to give in to these days, and like the old song, accentuate the positive! But always with a groove… As the last song on the album says, ‘Everybody should be king of their world every day…’

“The Soul Food Store is now opening: You coming in..?”

There’s serious quality and variety to be found on the shelves of ‘The Soul Food Store’.

If you’ve a hankering for top quality blues and more, with something extra, ‘The Soul Food Store’ must be on your shopping and listening list.