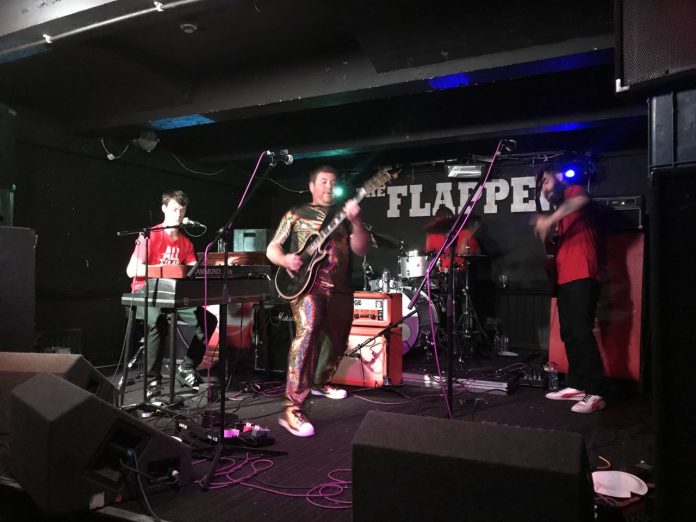 Just about the best way to spend a Sunday night

Welcome Back Delta might be involved in a disagreement about where they’re from – singer Joe thinks it’s “Gloucester, Bristol kind of way” while guitarist Andy Hammond reckons it’s “right in the heart of the leafy Cotswolds” – but one thing isn’t up for debate. The quality of their music. Seeing them for the first time for a while, MV is struck by how powerful they sound. Even without their usual bass player Phil Davies, who is in Hungary at the formula one and with Rob Duncan switching to four string duties, there is a real swagger about WBD. Sure, there are elements of Clutch here, but “Preacher” and others have a dollop of Southern Rock about them. “Daderous” is as ever a real highlight and “Spinal Injury” is played at appropriately breakneck speed and is better than any song called “Spinal Injury” has a right to be. Welcome Back Delta remain one of the absolute best of the bubbling under bands in the U.K.

Ending your set with a Xylophone solo is not a conventional thing to do, but then Black Asteroids are not your conventional band. The Worcestershire two piece don’t bother with guitar and they have even less time for vocals, but their sound is always compelling. Not being a musical type MV has no idea how they do it, but we do know that for the most part BA deal in pummelling. Less a gig more being bludgeoned, there are nevertheless some lighter psychedelic moments in the brew. Then there’s the xylophones. Drummer Chris Allen plays his with devil horns up and if you can find the metal in percussion then you are pretty special. Unique is an overused word. Find a better one to describe Black Asteroids.

For a man wearing what looks to be a gold onesie and gold trainers, Lionize’s Nate Bergman speaks a lot of sense. “Each time we come here,” he says in a way that suggests he means it, “there’s more people and the reaction is fantastic. It means the world to us.”

For Lionize it has been a pretty old school career trajectory. Slowly building a fanbase has been the order of the day, but there is a real sense that they could be ready to make that real step up.

When last MV saw them, just before Christmas, they played entirely new songs, not so here, although with the “Nuclear Soul” album just six weeks or so away there are a good number from it. Rather, there is a real confidence about their older material such as the wonderful “Evolve”, which they start with here.

That track contains the lyric: “I’ll steal your girlfriend and I’ll eat your lunch” and there is little doubt that come the end, around 80 minutes later, that the four could have got away with both those things – and just about anything else they fancied.

In fact so good are they here that where most bands would be met with stony silence if they tried to chuck in a shedload of songs that people didn’t know, Lionize only face smiles and people jumping up down.

Mostly that’s because the new songs – only “Blindness To Danger” with its superb organ solo from Chris Brooks has been released so far – are just so damn good. “Face Of Mars” and “Fire In Athena” are both going to be showstoppers when the record is out, but also its because the band have done what they set out to do and got themselves a loyal crowd.

The stuff the fans do know is shot through with a real charge, notably the Clutch-isms of “Replaced By Machines”. Mention of Neil Fallon’s men is almost unavoidable given the two bands relationship, but there is so much more to Lionize than a “baby Clutch”, not least the aforementioned Brooks, but Clutch don’t jam like Lionize do on “Trustafarian” either as Hank Upton and Chase Lapp mesh perfectly in the engine room.

That is one of three that end things that are not from the new record. “Breather” is anything but and the epic sounding “Dream Wizards” brings the night to an end.

One of those rare evenings where band and crowd seemed to bond. You feel Lionize had better get used to it – and Nate Bergman best get some new onesies. Their time is coming and like something else nuclear they are about to explode.