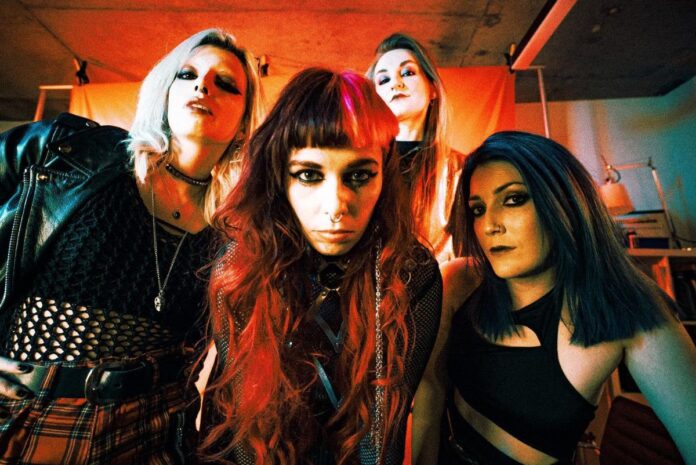 Guitarist / vocalist Anna Papadimitriou comments: “The message of the song is simple; some people are just little sh*ts 😁. And the sooner you realise that it’s not your responsibility to understand them better or bend over backwards, the sooner you will feel like the 10/10 fabulous gremlin you deserve to feel like. Essentially it’s about understanding that other peoples behaviour isn’t a reflection on you and isn’t something you can control : The Worst Thing I can wish on you is to remain just who you are. Bye!”

New single ‘The Worst Thing’ follows this week’s announcement that Hawxx will appear at Download Festival 2023. Having exhausted 2022 touring with Tremonti, appearing at Radar Festival, Download Festival, Great Escape, Summer Breeze, Burn It Down and more, Hawxx are firmly becoming one of the hottest UK live acts.

Concocting a mixture of doom, alternative, and technical metal, the quartet of virtuosic musicians decimate with every nimble drum pattern, masterful guitar solo, and Valkyrie-like vocal harmonies that will have you running head-first for Valhalla. Writing songs about oppressive beauty standards, mental health struggles, violence against women, self empowerment, the tales of being a norty gremlin and much more. Hawxx write the songs that need to be sung, as vehicles of catharsis, love and rage.

The band are currently fundraising for their debut album, due out in 2023, more info can be found here: https://www.gofundme.com/f/hawxx-are-making-their-debut-album

Hawxx aim to bring diversity and inclusivity to the rock and metal world and reform the standard sausage fest that dominates heavy music. The quartet write songs that reflect self empowerment, the lies of the diet industry, mental health struggles, and the challenges of being different.​

Their first EP, Deadlands, came in 2020 and saw the band experiment with anarchic and lawless pinch harmonics, twin guitars, and unbridled lyrical vulnerability. Their second EP, You’re Only As Loud As You Shout Right Now, is receiving consistent positive response from press and radio, including features in Metal Hammer, Classic Rock Magazine, Powerplay, and Rock Sound, as well as airplay on BBC 6 Music, BBC Introducing, The Metal Hammer Show, Primordial Radio A-list and Planet Rock Radio.

2020 saw the quartet become winners of the PRS Women Make Music Award and the chance to give an exclusive performance at the Heavy Music Awards. In 2021 they won Metal to the Masses, London, and played a packed out tent at Bloodstock Festival, described by Metal Planet as an ‘I was there’ moment. In November 2021 their debut music video for ‘Death of Silence‘ won Best Rock Video at the International Music Video Awards and ‘Hologram‘ won Best Music Video at BFII Sweden. Hawxx are:
Anna Papadimitriou – vocals / guitars
Hannah Staphnill – guitars / backing vocals
Jessica Dann – drums / backing vocals
Julia B. Cadau – bass / backing vocals