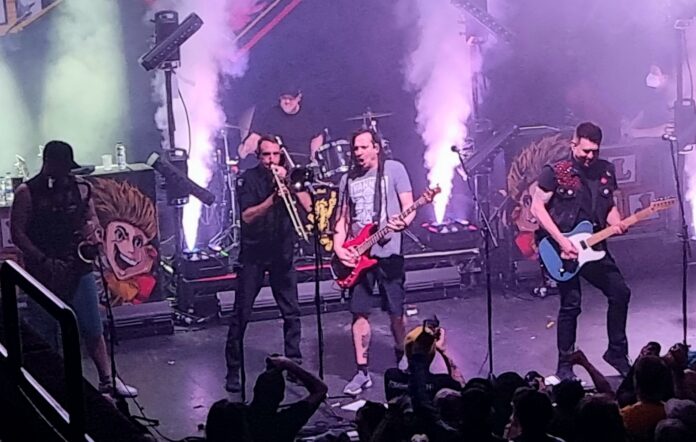 It’s a long held belief of mine that Skinny Lister would be a brilliant festival band. They are a must see live. One of the sort of bands, actually who, when you listen to their records you imagine them in the live setting, but such is their energy and sheer love of playing live that surely there’s not a crowd in the country they can’t win over?

Well, here’s their chance to prove it.

There’s a lot of partisan Less Than Jake fans in here, and when Dan Heptinstall (one of the trio that effectively front Skinny Lister) says “who saw us here in November?” There’s not many who cheer except MV.

But here’s the thing about fabulous live bands, they find a way and for 45 minutes here Skinny Lister do just that.

A radically different set than back in November too, “38 Minutes” spits with energy, “My Distraction” likewise as it proves the sheer breadth of their stuff. And that really hits home here. For every ballad like “Colours” there’s a trad folk one like the sea shanty “John Kanaka” and a kind of drinking song like “Irene”.

“This Is War” is furiously indignant, and by the end of “Trouble On Oxford Street” the job has been done. The crowd is on their side. It was an outcome never in doubt.

Ok, admit it, who had “play out with Bon Jovi” on your Less Than Jake bingo card. “Never Say Goodbye” belts out of the speakers as they leave the stage, and let’s just say, no one is surprised.

Rewind an hour and Less Than Jake raced onto the stage with the aim of making up for lost time. To call it “breakneck” would be to do it a disservice, to call it “madcap” would be to sell it short. “Unique” makes it seem like a cliché. The truth is its all of that and more.

The fact is that Less Than Jake are infectious. They are like a tide that you can’t outrun. “Gainesville Rock City” is a perfect example of what they do. Sugary punk with the horns over the top – not as an afterthought either, but absolutely integral to the sound and front and central.

But this is about more than songs. This is a show. Cannons blow smoke, then there’s a machine gun with toilet paper shooting all over the place in “Automatic” for example, and every so often there’s a new song thrown in, with “Lie To Me” underlining the class of the most recent material.

Chris DeMakes and Roger Lima front the band like no one else does. This isn’t far from an episode of Beavis And Butthead given the double act. To that end, DeMakes eats a banana to help with his leg cramps and informs everyone that “Motown Never Sounded So Good” is his favourite song. Well it might be too, given that it was the one that started all this off for them.

This is a career spanning set, “Motto” engenders a huge moshpit, while for “Look What Happened” (“our biggest hit in Scandinavia” says Lima) they are joined by Millie Manders from the first support band tonight. It’s just fun, though, and it feels like a family thing – the crowd singing happy birthday to DeMakes father in law  – but it also feels like one where the crowd have been waiting for this throughout the lockdowns and there’s a real atmosphere here.

“Anyone And Anywhere” is another from the new record, “The Ghosts Of Me And You” has the Wacky Arm Waving Inflatables to usher in an encore. And if anything, the encore turns it up a notch. “My Very Own Flag” (from their debut record back in 1995) thunders, but this really was only going to end one way. “All My Friends Are Metalheads” is like a journey to the past too. Where it sounds like you are living in a virtual Bill And Ted’s film, and Buddy “Goldfinger” Schaub, and Peter “JR” Wasilewski are the finest horn section around. Ska, punk, fun, all mixed up like some kind of experiment. Less Than Jake – more than the sum of their parts. And the absolute masters of their craft.

There is only one way a band lasts for almost 30 years and pulls in a crowd like this on a Wednesday night “when you’ve all got to be up early” as DeMakes puts it, and that’s to be very, very good indeed. For all the peripherals – and Mr Skull, their version of Eddie The Head if you will – makes more than one appearance, including holding a sign up that says “Drugs” during the knockabout “Fat Mike’s On Drugs”, Less Than Jake are deadly serious when it comes to delivering.

They get a little better each night, they reckon. Bournemouth, you’re in for a belter of a night tomorrow if tonight is a guide. And you’ll have to admit you love Bon Jovi, which is a bonus.