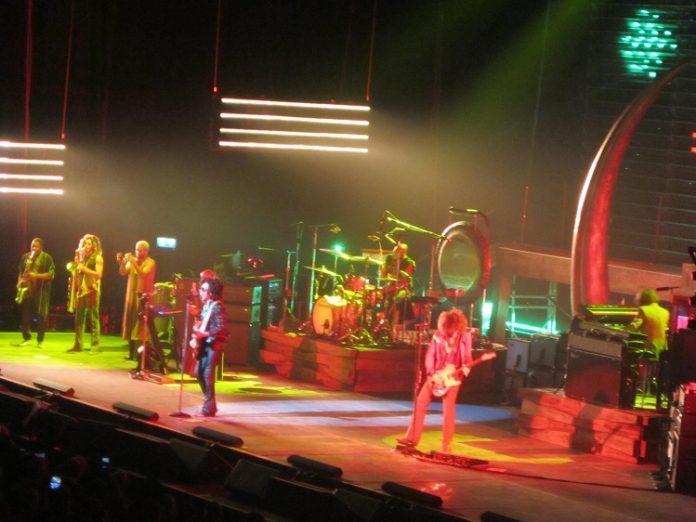 Three words. Uttered, actually, by the man himself right at the end of his band intros about two-thirds of the way through his couple of hours tonight, and with that, the riff for “Always On The Run” starts.

Not just that one, but a shedload of songs people know – and even the most casual of observers would know about five of these – are what gets you to arenas, and the fact you can stay there for thirty years is testament to a career, not some passing fancy.

But then, Lenny Kravitz, was surely made to be a rock star. He exudes whatever X Factor you need (and by that I mean stardom, not the bland shite on tv) and swaggering around clad in leather with his dark glasses on, there is a very real possibility that Lenny Kravitz was cooler when he had his breakfast this morning than I’ve ever been in my entire life.

He begins tonight with the spotlight on him, standing ten feet above the stage on his platform, singing “Fly Away” and he and his band – including Gail Ann Dorsey, who worked with Bowie, on bass and Craig Ross on guitar – sound phenomenal.

There’s plenty of the massive hits, because, he’s sold a load of records. “American Woman” might be a cover, but lets face it, he owns it, “It Ain’t Over Till It’s Over” is soulful and as fresh as ever and “Can’t Get You Off My Mind” is almost southern rock.

Those you might expect, but there’s a couple of new tunes from a forthcoming record, “It’s Enough” dials up Kravitz’s Prince stylings to the max and “Low” – sung in a falsetto style, is absolutely funky soul. It is noticeable that for both these Kravitz doesn’t play guitar. Whether this heralds the future, lets wait for the autumn to see. 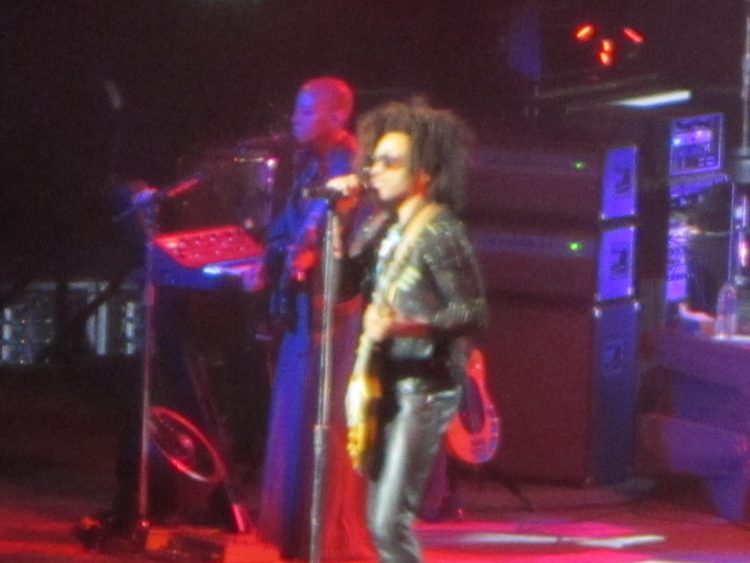 Few can match the scope of the sound here. “Believe” is full of Beatles style psychedelics, “Why Are We Running” is the absolute spirit of rock n roll, right down to the piano solo from George Laks, while “The Chamber” is a 70s style glam rock freak out – and there are many others we could have picked out with just as much ambition.

The encore is lengthy. First there’s “I’ll Be Waiting” with Ludovic Louis on horns taking centre stage as Kravitz plays piano, before “Let Love Rule” becomes a centrepoint. This is basically down to personal choice, but I would prefer to see an extra song rather than watch Kravitz walk around the venue to meet his people. That said, the basic concept of letting love rule isn’t a bad thing when the most powerful man on the planet is locking children into concentration camps at the moment.

Politics aside, this is a rock n roll gig, and it becomes one again with the visceral “Are You Gonna Go My Way” which is one of those copper-bottomed classics a bit like “Brown Sugar”, say, or “Back In Black” that makes everyone want to join in from the second the riff kicks in.

And that, in effect, is what separates the arena rockers from the also-rans. Lenny Kravitz is one of the former and he gave a lesson in both how, and why, tonight.

Previous article
BLACK LABEL GET TRAMPLED ON
Next article
BAND OF THE DAY: SPEEDBUGGY USA