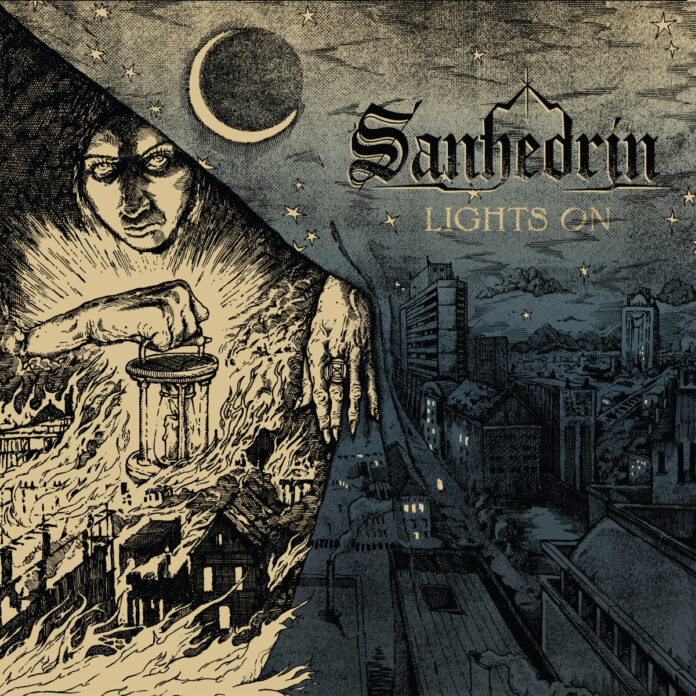 New York‘s SANHEDRIN have released their upcoming album, Lights On, today via Metal Blade Records. The Brooklyn power trio do metal the old school way, channeling the greats that preceded them to create something that is instantly familiar yet with a new, modern energy to it. The band also delivers their latest single, the writhing and controversial “Scythian Women.”

To preview and purchase the record in various formats, please visit: www.metalblade.com/Sanhedrin

Vocalist/bassist and key lyricist Erica Stoltz says that she is reflecting that which she sees, “having some existential crises and celebrating life,” and she draws from a broad palette. “Scythian Women” refers to a significant archeological find in Russia in December of 2019. “A burial of 4 warriors aged 12 to 50 years old with all of their battle gear was found. They were all women. The 12-year-old had her legs broken in death to look like she was riding a horse. These were Scythian warriors, and pre-Christian expressions of womanhood.”

Tracked, mixed and co-produced by Colin Marston at his studio Menegroth, The Thousand Caves in Woodhaven, Queens, NY, Lights On refers to the many events of the last few years that have exposed larger societal issues long hidden or ignored. “In a manner of speaking the veil has been lifted before our eyes and the light is finally shining through the darkness,” says guitarist Jeremy Sosville.

Rounded out by drummer Nathan Honor, the band state, “In a time where the world around you feels like it‘s aflame, when our heavy metal heroes are beginning to disappear to failing health or changing social norms, we, SANHEDRIN, stand here as a shining light through the dark. We are prepared to fly the flag of heavy metal in these trying and uncertain times and have only begun to show the world what we are capable of.”

SANHEDRIN is slated for festival appearances across Europe and the US this year, starting with a record release show at NYC‘s famed St. Vitus, followed by the “Slaves Of Light Tour,” with German rockers Stallion, kicking of May 1st in Osnabruck, Germany.

Earlier this year SANHEDRIN released “Correction,” the first single from Lights On. Stream Now and purchase Lights On at Metal Blade Records in these formats.
www.metalblade.com/sanhedrin