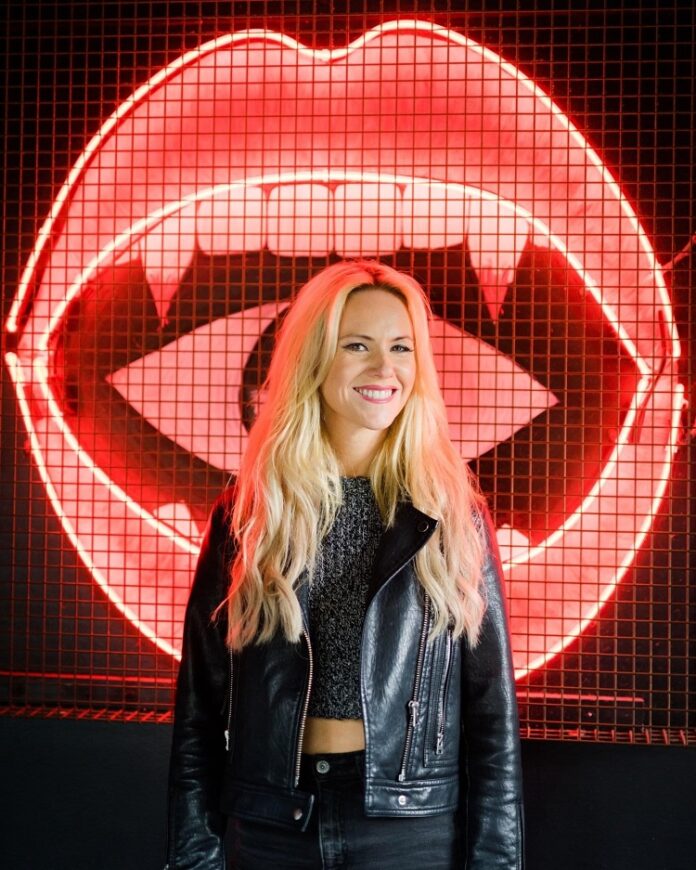 Laura recently announced her  second single “Fire with Fire” from her debut album State of  Mind. The new single  is a perfectly crafted song which is sure to appeal to her ever-growing  fanbase. The single is available  from Spotify, iTunes & Apple Music and Deezer.

“Fire With Fire” follows the success of her first single “I’m Alright” that saw Laura getting huge support from Spotify and making her the face of the “Nu Blue” playlist, as well as continued support from Planet Rock and the BBC Radio Wales Welsh A List.

“Fire With Fire” is full of bluesy rocking guitars, a melody, and lyrics full of heart and soul that feels nostalgic and reminiscent of the Fleetwood Mac era. This track is the ultimate showcase for Laura’s versatile and unique vocals. A taster of what’s to come for fans eagerly awaiting the full-length album on July 1st. Pre-order the album from https://linktr.ee/Laura_evans.

Laura explains she had the idea and wrote this song during lockdown 2020 co-written with her partner Rich Turner, Laura says “Rich started playing that verse riff on guitar and it reminded me of Fleetwood Mac, and I definitely wanted to put a “spin off “on my usual heartbreak song, hence that’s the first line of the verse, the lyrics were truly poignant for me at the time, they are simply about working on yourself and your peace of mind”

Recorded and produced by long-time collaborator Josiah J Manning, at Momentum Studios (Kris Barras Band) who produced Laura’s whole album, this creative dream team continue to push the boundaries across genres, appealing to the masses with a unique blues/rock sound that really is making Laura stand out amongst the crowd.

Born and raised in the valleys of South Wales, you may be wondering how this sweet demeanour, 5ft 3, pretty, blonde valleys girl is becoming one of the UK’s most exciting singer songwriters to hit our airwaves since Stevie Nicks. Laura Evans is proving she is so much more than meets the eye with her powerhouse sweet and smoky vocals, perfectly crafted anthemic hit songs that straddle the worlds of rock, blues, and Americana.

In 2020, Laura first burst on to the music scene with the first single from her debut E.P.  “Running Back To You” which impressively charted straight at number one on the UK blues chart and peaked at 43 on the US blues chart as well as follow up singles “Drag Me Back In” and “Solo” were added to several Spotify and Apple Music playlists including Nu-Blue and Blues Drive curated by Heidi Shenk, alongside American artists including Larkin Poe and Dave Stewart Very Nearly Nashville and Apple Music’s New In Country playlist alongside Taylor Swift and Eric Church. The E.P. racked up thousands of streams in the first week of release, resulting in the last single ‘Take Me Back Home’ distributed worldwide by U-NXT c/o Universal Music.

It seemed Laura was an overnight success. On the contrary, this valleys girl has been honing her craft for quite some time. She has finally found and created a sound that is truly breaking through and finding the recognition it deserves. Laura grew up listening to an eclectic mix of music from artists including Bonnie Raitt, The Eagles, Fleetwood Mac, Dolly Parton and more. Even though these influences really shine through on the album there is no doubt Laura with the help of producer Josiah J Manning, has found her own unique sound.

Laura met producer Josiah J Manning in 2020 at Momentum Studios in Devon and together they have worked and collaborated as team ever since. An accomplished singer songwriter Laura had hundreds of songs to choose for the album and she explains that she had to work incredibly hard and did soul searching to decide which tracks were going to make it on to the album and what direction she wanted to push them in.

“It was important for me, not to sound like everyone else and do what everyone else is doing,” explains Laura. “I’m a storyteller, so lyrics are particularly important to me, I like to think every song on this album has its own story. I love big vocals, big chorus’s, strong melodies and pushing myself out of my comfort zone when it comes to recording vocals, too. I’m also a sucker for a ballad, so I had to check in with myself and pick my favourite ballads sparingly so that the album was well balanced. It was imperative that each song on the album makes you feel something and moves you. I’m staying true to who I am as an artist.”

Josiah J Manning is not only a profound producer but a talented multi-instrumentalist, he played every instrument on every track on the album.

“It was clear from day one working with Laura that her sweet vocal tone matched with heavy rocking guitars was just a perfect match and a great contrasting combination, says Josiah. “It was a direction she hadn’t explored before. Once we started exploring that, everything just fell into a place. We found a modern sound but still had a vintage feel about it. It’s rocky with a slight edge but perfectly balanced Laura’s voice. The songs are just so good. We had to get the production right to highlight the songs the best way possible.”