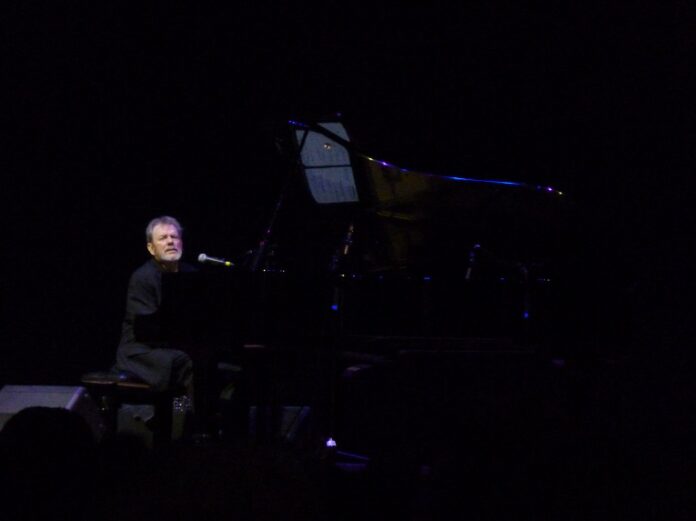 Special guests tonight was Ashley Campbell and Thor Jensen. Ashley is the youngest daughter of country singer Glen Campbell and played banjo for her father during his farewell tour in 2011 and 2012. Thor Jensen is a renowned New York guitarist who has an eclectic range that covers Americana, jazz, world, and roots music. They met in late 2021 and have been playing music together ever since, having recently recorded several singles.

There`s little fuss as this duo arrive on stage and enthral us for the next forty five minutes. They begin with the jazzy `La Bête` a single that  Ashley released last October which is delightfully mesmerising and ends with the line “L’amour à faim comme la bête” or “love hungry like the beast”. They cover a Jimmy Webb song second number in with `Careless Weed` before sharing a Thor Jensen written number with `Moving On`. Their latest release a cover of Tom Waits `Long Way Home` is played and it works so well as both musicians really connected throughout this compelling listen.

Ashley picks up her banjo and shares an instrumental with `Jackson`s Music Shop` and `Waltzified` a Willie Nelson number. John Cowan Hartford`s `Gentle On My Mind` a hit for Ashley`s father in 1967 shines brightly before Thor offers `St James

Lament` from his recent solo album `Harlem Valley`. There`s a heart-breaking rendition of `Remembering` a song that Ashley wrote about her father`s struggles with dementia before the pair leave us with a cover of the Beatle`s `Eleanor Rigby`

This was a collaboration that worked so well and it`ll be interesting to discover what music they make together in the future.

Tonight, was billed as `An Evening with Jimmy Webb – Music & Storytelling from America`s Songwriter` and has come two years after it was originally planned.

As has been said before this songwriter has written songs that transcend generations and genres and he opens the show with `The Highwayman` which was a massive hit for the quartet who named themselves The Highwaymen in 1985 and comprised Johnny Cash, Waylon Jennings, Willie Nelson, and Kris Kristofferson. This really kicked off the sub-genre of Outlaw Country music. The classic `Galveston` a song written about a soldier waiting to go into battle who thinks of the woman he loves and his hometown is shared and the songwriter talks about his father an ex-Marine and preacher and reminisces about his early childhood and learning to play the piano. His early career was at Motown and he plays his first major hit the sunshine pop number `Up, Up and Away` which The 5th Dimension took into the charts in 1967 and won him a Grammy. Glen Campbell had recorded `By The Time I Get to Phoenix` which also won a Grammy that year for best male vocal, another number penned by Jimmy which he also sings.

`If These Walls Could Speak` is offered up, a number written about the singer`s New Jersey home Grove House built in 1839 and `Do What You Gotta Do` which Kanye West sampled for his `Famous` hit.

Another hit for Glen Campbell `Wichita Lineman` gets the Jimmy treatment and `Didn’t We` a number that Frank Sinatra covered. The show closes out with stories about travelling in Ireland with Richard Harris as we hear an extended version of `MacArthur Park` which Donna Summer also covered.

The singer-songwriter returns for a one song encore with `The Moon Is a Harsh Mistress` a track that he felt Judy Collins made her own. He promised to return next year , gave a bow, waved, and left the stage.

This was a really captivating evening of songs and some tales behind their composition and the famous artists who recorded them.

Jimmy Webb is a musical genius and proved why this evening.