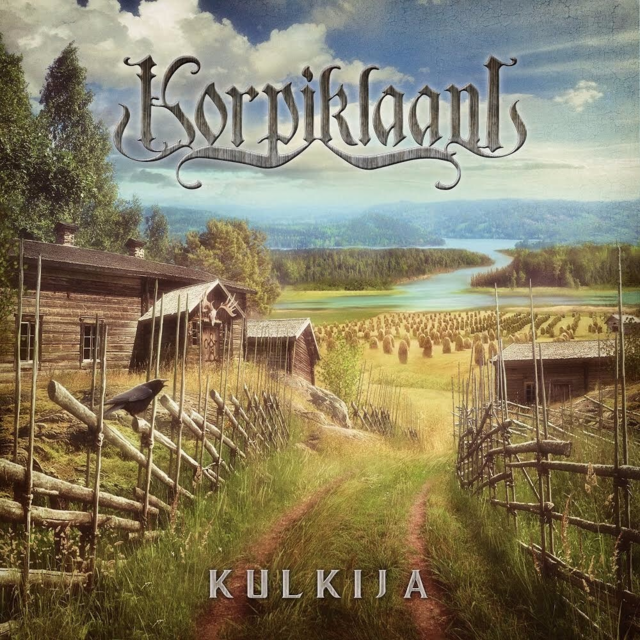 Finnish folk metal superstars Korpiklaani are happy to finally announce the release of their upcoming 10th studio album entitled Kulkija (“Wanderer”), on September 7th 2018 through Nuclear Blast. Its cover (above) was designed by Jan Yrlund (Battle Beast, Manowaretc.) who has already created several artworks for some of the band’s previous albums and singles.

Founding member Jonne Järvelä commented:
“We’ve never been as satisfied with a final result as we are with Kulkija. We tried to keep it very natural, and that’s what you’ll soon clearly be able to hear. Like the wanderer, this album is a journey, one that makes you feel good. Stay tuned!”

Accordionist Sami Perttula added:
“Kulkija isn’t just a collection of songs, it’s a “real” album with a unique atmosphere guiding the listeners through a long journey. All songs were well prepared in advance and nothing needed to be arranged in the studio. Tuomas [fiddle] & I had lots of space to develop and play the folk arrangements.”

Korpiklaani‘s latest release titled Live at Masters of Rock is out now via Nuclear Blast.

You can order Live at Masters of Rock now here: https://media.nuclearblast.de/shoplanding/2017/Korpiklaani/live-at-masters-of-rock.html

After hearing the title of the package, it’s easy to conclude that it was recorded at the identically named festival in Vizovice, Czech Republic. But there’s even more for fans to be excited about, this release doesn’t just include Korpiklaani‘s show from 2016, it even has a second full show from 2014 as bonus feature. The 2016 concert features guest appearances from Tero Hyväluoma (additional fiddler) as well as Toni Perttula (additional accordion player), Sami‘s identical twin brother. Mixing of Live at Masters of Rock was handled by front man Jonne Järvelä himself, mastering was done by Svante Forsbäck (Rammstein etc.)

Previous article
give us another ring
Next article
Imminence Say Goodbye