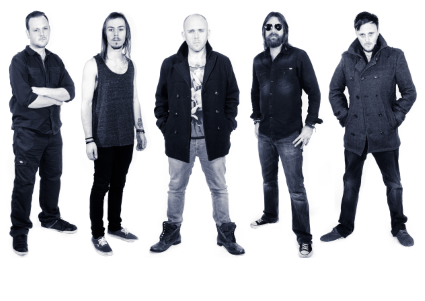 Due for release on the 10th August, ‘Scars’ continues to build on the Kodiak sound with big riffs and hook laden choruses and features the upcoming single ‘Only The Good’.

Recorded in Aubitt Recording Studios in Hampshire and produced by Rob Aubrey (Dragonforce, Spock’s Beard), the four tracks have been honed live during the last few months before the band entered the studio in May to start work on the EP. From the instant rock punch of ‘Only The Good’ to the anthemic closer of ‘All I Want’, ‘Scars’ delivers four tracks that show the band learnt much from working with Brian Wheat (Tesla) on ‘Alhambra’ and have continued to develop their songwriting both musically and lyrically. Featuring some of Bryn’s most emotionally raw lyrics to date, ‘Scars’ tackles relationships, both personal and within the music industry and is cathartic but displays the band’s no surrender attitude.

This time around also sees Jon Karp’s vocal harmonies more to the fore, especially on the first single ‘Only The Good’ and the beautiful title track ‘Scars’. Having started the year by winning the coveted Best Band category at the Portsmouth Guide Awards in January and following this with a string of live shows including a support with cult Italian blues-rockers The Cyborgs and a slot at this year’s Isle Of Wight Festival, the band are set to headline the Southsea Stage at Victorious Festival in their hometown of Portsmouth in August.