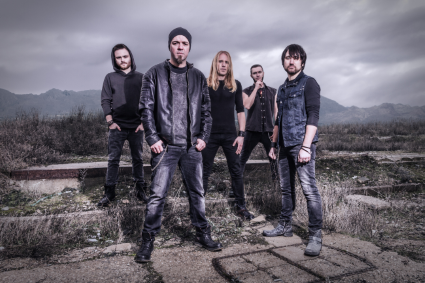 German newcomers Gloomball’s sophomore album ‘The Quiet Monster’, set for release on March 30th on Steamhammer / SPV, is an even more accomplished, diverse, dynamic offering than the band’s much celebrated ‘The Distance’ debut LP. ‘The Quiet Monster’ picks up seamlessly from where its impressive predecessor left off, leaping and bounding a major step further in terms of composition and lyrics.

While the majority of the tracks on ‘The Distance’ were written by vocalist Alen Ljubic and guitarist Björn Daigger, this time the whole band were involved in the songwriting. “‘The Distance’ was written mainly by Björn and me, whereas this time around, Jossi, Basti and Danny also contributed to the creative process, which is why the album as a whole has turned out to be so much more diverse and multi-faceted,” explains Ljubic.

A further factor which has audibly influenced this progression is the involvement of the band’s favoured producer Kristian ‘Kohle’ Kohlmannslehner (Hämatom, Crematory, Powerwolf, among others) at his Kohlekeller Studios near Frankfurt. Ljubic; “Kohle was at the top of our list because we’ve always liked his broad range which includes all kinds of genres, from death metal to rock. Plus we really wanted to involve a sixth person with an open mind who would be able to add his ideas and experience as a kind of cherry on the cake. Kohle and the band were on the same wavelength from the start, as you can hear from the result.”

And he’s right; ‘The Quiet Monster’ surpasses ‘The Distance’ in every which way. Typical hard driving rock belters such as ‘Straight To Hell’ and ‘Towards The Sun’ perfectly capture the band’s pure energy, dynamism and catchiness, while ‘Sullen Eyes’ a heavy metal groove track with – as Ljubic calls it – “an unusually nasty feel by Gloomball standards”, reveals a surprisingly earthy and heavy side. ‘Blood Red World’ is equally experimental, and sees Gloomball embark on new paths, working with choirs and even experimenting with string sections towards the end of the track. Talking of choirs, mention must be made of the background vocals on ‘Monster’ and ‘Blue Is Turning Into Gray’, which feature Matthias Hechler of German gothic metal act Crematory.

The lyrics penned by Alen Ljubic, are even more pertinent and personal, such as on ‘Monster’ with striking lines such as “Light the world up, be the monster, I will never break and I know I can take this monster.” Ljubic explains that “I like to work with metaphors, and somehow there’s a little monster in every one of us, it all depends on whether you use it in a positive or negative way.”