Killing Joke Have A Laugh 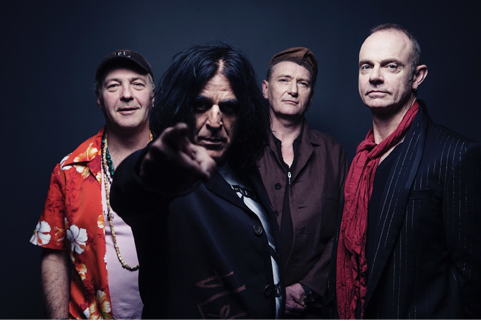 Gatherers of the World, Killing Joke are delighted to announce their 40th anniversary World tour, Laugh At Your Peril.

To celebrate this extensive and ambitious tour, Killing Joke announce the release of the career spanning strictly limited edition flight case, which includes: 16 coloured double vinyls, a set of headphones, a signed lyric book and assorted pieces of art. The collection will also be available on CD.

‘Forty years ago this summer I met Big Paul, one year later we released our first EP. Our fortieth anniversary celebrations will therefore be stretched over 2 years and begins with a world tour, parties and talks by Youth and myself, a new magnum opus by KJ, who is ,after all this time, recognised as one of the most innovative and influential bands of all time. Love is the law let the festivities begin!!! ” Jaz.

“Forty years in the wilderness …Thought that was supposed to be 40 days.
As Jaz reminds me “Survival is success” and although the band have never been fiscally fat commercially, it has allowed us to have incredible lives, both individually and collectively and we have created a very rich wealth of uncompromising music. It’s a legacy, that spans 4 decades ….40 years of spine tingling, uncompromising beautiful noise.
The band continue to inspire and bludgeon down the bullshit in the world into a white hot, blast furnace Dub of unrelenting passion, a rollercoaster, white knuckle punch in the face of beautiful agony/reality and timeless cosmic joy and soul.
To commit to the creative beauty and vision you have as an artist, is an almost perverse way to live a life and the cost and consequences are immense…yet this is how we inform ourselves as a society, of what is real and important In a world of fake news and fake emotions …Like Shiva dancing the world into existence, we are all simultaneously destroying and creating every moment of our reality . It is not though politics that the world is changed but through Art. Art alone can tell us who we really are, emotionally, intellectually and physically, far better than anything else. That is why we have committed so much, for so long to this one idea …Killing Joke
Thanks to all the fans and gatherers that have supported and joined us in this endless quest.” Youth.

Killing Joke will start the tour in the United States at the Studio Seven in Seattle on Saturday, 1st September before heading into mainland Europe. This run of 45 shows concludes at the Roundhouse in London on Saturday, 17th November.

Very much music as ritual – raw, uncompromising and precisely-targeted lyrically; Jaz Coleman, Geordie, Youth & Big Paul, the original Killing Joke personnel, are currently delivering the best and most relevant material of their career, with no mellowing or softening of the edges getting in the way.

With collective nostrils flared and righteous anger carried torch-high, Killing Joke continue to take their music of resistance to fresh levels, both in the studio and out on the road…

The 15 studio albums with bonus tracks and the extra content bonus album, are all on individually coloured vinyl in new designed “stamp” sleeves.

The bonus tracks include unreleased material and alternate mixes plus 8 new tracks never released in any format.

One 10 x 8 photo of the couple on the beach.
Two A4 flyers (Acklam Hall and Clarendon)
Five A2 posters (Wardance, Turn To Red, Pope, What’s THIS for…!, current tour poster)
Five A3 posters (Pandemonium, Red version of first album, Pylon, the album stamp images, plus one of a J Cauty image).
One set of 6 postcards (images supplied by Youth).
One certificate of authenticity.

The 40th Anniversary CD Box Set
This will feature 16 double CDs in mini gatefold packs with printed inners will be hosted in a specially designed box.

To pre-order The 40th Anniversary Box Sets on Vinyl and CD : http://www.killingjoke.co.uk/

Original studio albums with unreleased and alternate mixes plus 8 new tracks never released in any format.

Previous article
New Roses On The Road!
Next article
THE DEAD DAISIES, THE AMORETTES@ ROBIN 2, BILSTON 9/4/2018