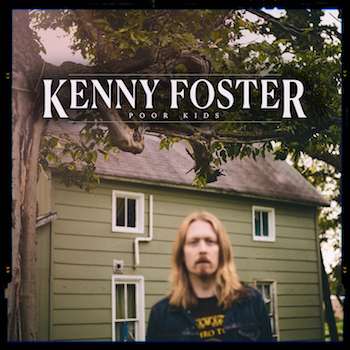 Serving both as the follow up to the title track – released in January – and the second song on the album itself, ‘Poor Kids’ builds on the wider story Foster aims to tell through the project, painting a loving picture of his Missouri roots, yet one that is unafraid to recognise its flaws. Kenny co-wrote the song with Chris Rafetto and Brendan Cooney, and the trio found common ground on several themes which are sure to resonate with anyone who found the joy in life growing up, whether it was building a “tree fort out of spare boards,” or “a cardboard box for a TV,” – at the end of the day, they knew “the livin’ was good.”

“Kids can be cruel. As if growing up wasn’t hard enough, you had these little jerks to contend with,” he says. “They’d say stuff just to be mean, even if it wasn’t true. I can’t imagine how much of their self-worth and brainspace was wrapped up in their ability to put others down. As I get older I realize some of those kids never grew out of that phase. Brendan brought a great idea to the room that day, and it only got richer as Chris and I added our pictures and experiences to the story. It needed to be both nostalgic and present, a reminder that no matter what “they” call you, there’s a truth separate from a name, moniker, tag, stigma. There’s a real life being lived behind every insult, and more often than not: it’s sweeter than the words that get picked.”

The singer-songwriter also announced today that Somewhere In Middle America will be available on July 29th, 2022, with subscribers to The Foster Fam mailing list getting exclusive early access to purchase the album. To join, fans can visit kennyfostermusic.com to receive an immediate free download of the acoustic Bonfire Edition of the album’s title track.

Following the early release for fans, Somewhere In Middle America will be available on all major streaming/download platforms on October 19th, 2022.

Additionally, Kenny Foster will make his highly anticipated return to the UK this August, with a main stage performance at Millport Festival in Scotland (Aug 19-20) alongside Drake White, Sarah Darling, Sunny Sweeney, Ruthie Collins and more, with other shows to be announced soon.