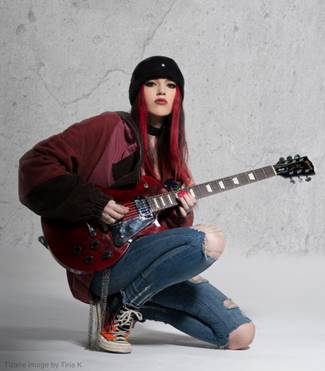 ‘In The Dark’ is the latest remarkable single from dark-pop’s rising star Tizane, South-East London’s most intriguing and hotly tipped young artist.

Released on 18th March 2022 on independent label Burning Girl Records, ‘In The Dark’ is Tizane’s deeply personal ode to anxiety; a macabre confection crammed with angst and paranoia, coated in her signature silky vocals.

“Anyone who suffers from anxiety will tell you how crippling it can be,” says 20-year-old Tizane. “In The Dark is about pushing through it all; doing instead of thinking.

This sentiment can also be said of her ambition. Like Amy Winehouse before her, Tizane has already established herself as a face on Camden’s historic music scene, with frequent performances at iconic grassroots venues such as The Dublin Castle and The Fiddler’s Elbow serving as the fulcrum for an ever-growing fanbase, dubbed ‘The Tizaniacs’ by the underground music press.

Determined not to be side-lined by the pandemic, Tizane used lockdown to develop her writing and production skills, which led to a series of highly successful sessions being broadcast across her social media platforms, helping this emerging talent generate 90,000 followers.

But as soon as ‘Freedom Day’ was announced last summer Tizane set about forming her group, recruiting Harry Heathfield on guitar, Nathan Gordon on bass and Harry Dicks on drums, who were officially unveiled at The Portobello Live Festival, where she headlined alongside Sex Pistol Glen Matlock and legendary DJ Don Letts.

The first of several singles Tizane will be releasing throughout 2022, ‘In The Dark’ will be available to download worldwide and on CD, backed by a spellbinding version of The Buzzcocks’ anthem, ‘Ever Fallen in Love (With Someone You Shouldn’t‘ve)’.

Click here to watch the video for ‘In The Dark’: https://youtu.be/9sRlTbQ-rBk