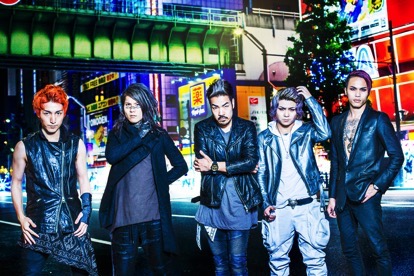 Japanese electro-metal heroes CROSSFAITH will hit the road next month for their most extensive UK headline tour yet, with special guests THE QEMISTS in tow. With just over a month to go until the XENO WORLD TOUR hits the UK, both bands have offered up exciting collaborations to whet fans’ appetites.

“Wildfire is the sound of Crossfaith live shows” explains frontman KENTA KOIE. “It’s crazy, heavy and a real party! And this collaboration with the legend Benji from our boys Skindred is a proper banger that we just love to play. So if you want the best night of your life, come see us on the #XENOWORLDTOUR soon in the UK & Europe!”

“Collaborating with people from around the world is something paramount to the joy in what we do. I think to be able to spend time and appreciate people for who they are and the cultures they represent, to enjoy a unifying musical experience with them, that’s not only an honour but a pleasure. We’ve been fans of Crossfaith for a while now, so to get the opportunity to work with and then tour with them in the UK is something that we are enjoying very much.”

Check it out here: https://www.youtube.com/watch?v=bYEuMfZv1c4

Taken from forthcoming album ‘Warrior Sound’ out March 4th via Amazing Record Co, pre-orders with instant grats of ‘Anger’ and ‘Run You’ are available now from http://theqemists.lnk.to/WarriorSound.

CROSSFAITH XENO UK TOUR 2016 kicks off on 16th March 2016, with THE QEMISTS joining from 22nd after European shows with Enter Shikari. Check out the full dates below.

Previous article
Seventh, Son!
Next article
Torpedohead Back It Up