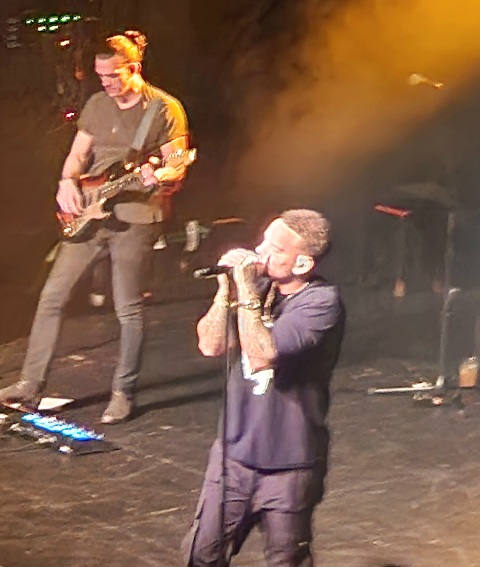 Restless Road and Kane Brown, as they say over there in America, go back a ways. Brown was meant to be in the band at one point and they appear with the headliner in his set later on tonight. That friendship going back a decade has landed them a slot on Brown’s world tour and credit to the three, they are making the most of their opportunity. Even more credit to them, though, for doing it in their own way. Armed with acoustics, their smiles, and an easy charm, Restless Road are absolutely the band that your mother would love. To call them pleasant isn’t intended as an insult and its what exactly songs like “Sundown Somewhere” are. Middle of the road rather than restless, indeed, Zach Beeken, Colton Pack and Garrett Nichol seem entirely comfortable just where they are. There’s a cover of Lewis Capaldi’s “Someone You Loved”, there’s a run through of Tim McGraw’s “I Like It, I Love It” and there’s some of their own too. “On My Way” – a new single released today – is heart-warming, feelgood, and as such is perfect for the band, and as if to underline how much these songs from the heart have captured the heart of people, there’s an onstage marriage proposal in “Growing Old With You” (she said yes, in case you were wondering). They end their set with “Bar Friends” (“they’re the best kind”) and in truth it’s impossible to dislike Restless Road. Three wholesome young lads spreading a positive message around the world? What’s the harm in that. None at all. After a decade, they may be poised to become overnight sensations.

“When I started in music,” reasons Kane Brown. “I had two aims. First I wanted to make my momma proud, then I wanted to make my hometown proud.” With that he plays “Hometown” and 3000 Brummies in the second city’s sold out crowd are eating out of his hand.

Over the course of his show tonight Kane Brown displays all the talent that has made him a megastar back home – he has a sensational voice and his band are fantastic – but he also underlines why he’s got such crossover potential.

He’d arrived onstage to Limp Bizkit’s “Break Stuff” and his opening shot across the bows is “Riot” – not far from Southern Rock – but he’s got an eye for the pop song too, as “Short Skirt Weather” more than neatly illuminates, as it takes in the honky tonk as it breezes by.

Brown is upset that he hasn’t got his full production on this tour and asks us to imagine the flames that usually accompany “Lose It”. What he’s really asking, of course, is for us to imagine this is in an arena, and that’s not hard to do. It will be.

He’s brought back “Homesick” for this run, and played with just a piano for company, it is a vehicle for that voice. His hit single “Thank God” is played about halfway through and its followed with another massive smash, “One Mississippi”. It’s impressive that he tosses them out as if not a big deal (although the reaction suggests they might be) and its also impressive how open he is about his struggles and his love of music. A de-facto medley in the middle sees him play some tunes that got him through and everything from George Jones, to Ben E. King and Soulja Boy is perhaps an indication of the melting pot here.

“Famous Friends” sees the boys from Restless Road join things, and the hard rock jam on “Bury Me In Georgia” is a highlight, as is the fact that he doesn’t bother with an encore, instead adding “One Right Thing” and “Heaven” before “What If’s”. “My first number one” he says. Rather matter of factly. There’s been others. There’ll be lots more. Kane Brown has got the talent and boy next door charisma to be anything he wants to be.

After explaining the pair of aims he had, he’d added: “and Birmingham’s my home town tonight!” It was hard to disagree.

Previous article
BAND OF THE DAY: APE SHIFTER
Next article
CATCH A MARVEL