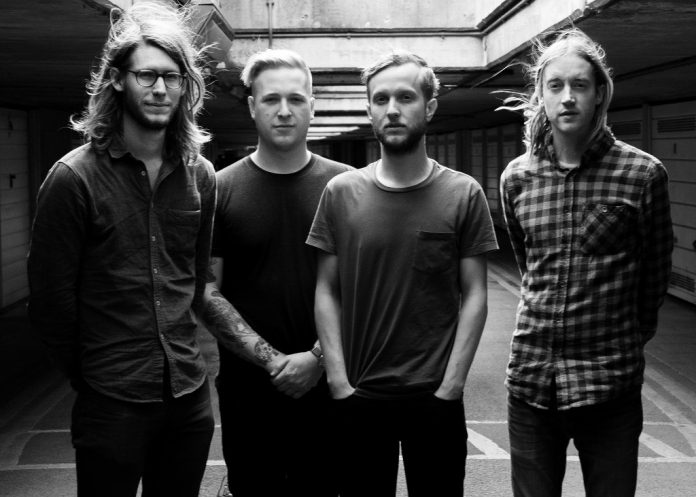 La Dispute have announced that they will give the soundtrack to their feature-length documentary, Tiny Dots, a special vinyl release on Record Store Day, April 16, 2016. The soundtrack will be released digitally on April 22nd. The band is streaming one of their original  compositions for the documentary, titled C, today via Soundcloud, alongside a statement about the release. Cover art and track listing for the soundtrack are below, which includes an A-side of original compositions and a live B-side filmed at All Saints Church in Kingston, UK on May 24, 2014.

Tiny Dots is now available online via Vimeo on demand for download and streaming, and physical copies of the documentary are available at http://ladisputemusic.com.  Directed by Niall Coffey, the official trailer can be seen HERE.  La Dispute will embark on a summer US tour with Thrice and Gates in June and will be heading to the UK for festival appearances in August.

“In the last few years I’ve become quite fascinated with the relationship between film and sound so, having the opportunity (if even only on a small scale), I proposed to the others that we should try our hand at scoring the documentary ourselves,” explains La Dispute drummer Brad Vander Lugt. “Given that most of us live in different places around the globe now, our collaborative process needed an overhaul, but we eventually found something that worked. Chad and Adam would start an idea (be that a motif, loop, or sometimes an entire movement), then send them my way, where I would add to, subtract from, or reconstruct them into something new. Jordan’s voice even makes an appearance once or twice.”

La Dispute released their most recent full-length Rooms of the House on Better Living in partnership with Staple Records in 2014.  The album was highly praised, appearing on several year-end lists including Paste‘s “50 Best Albums of 2014”, Consequence of Sound‘s “Top 50 Songs of 2014” and Alternative Press‘ “10 Essential Albums of 2014”.

NPR praised the record saying, “Rooms Of The House is an album based on what we leave behind, and what it means when new bodies and new emotions inhabit those places. It’s a lofty concept executed with care by La Dispute”.  Pitchfork also chimed in with year-end praise for the album, calling it “funny and wry and a little too real and raw… Rooms of the House can also be heartbreakingly romantic – “Woman (in mirror)” proved to be one of the year’s most touching, gorgeously written love songs – all the more devastating upon knowing its inevitable end”.

Rooms of the House was recorded and mixed by Will Yip at Studio 4 in Philadelphia, produced by Yip and La Dispute, and mastered at The Lodge by Emily Lazar.
‘Tiny Dots’ soundtrack tracklisting:
Side A:
A
B
C
D
E
G
Side B:
A DEPARTURE
FOR MAYOR IN SPLITSVILLE
WOMAN (IN MIRROR)
ST PAUL MISSIONARY BAPTIST CHURCH BLUES
A BROKEN JAR
OBJECTS IN SPACE
UK Festival dates: